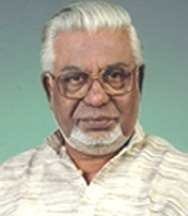 S. Abdul Rahman (Tamil: அப்துல் ரகுமான், born. 1937), is a Tamil poet from Tamil Nadu, India. He is known by the title Kaviko (lit. Emperor among poets). He was working as the chairman of Waqf board of Tamil Nadu.
Biography
Abdul Rahman was born in Madurai in 1937. He was a professor of Tamil for 29 years at Islamiah College, Vaniambadi. He belonged to the Vanambadi literary movement.In 1999, his poetry collection Aalapanai won the Sahitya Akademi Award for Tamil. In 2009, he was made the chairman of the Wakf board of Tamil Nadu. He is also a member of the Tamil Language Promotion Board of the Central Institute of Classical Tamil.