Asrar ul Haq Majaz (Urdu: مجاز لکھنوی, Hindi: मजाज़ लखनवी), (1909 - 5 December 1955), was an Indian Urdu poet. He was known for his romantic and revolutionary poetry. He composed ghazals and nazms in Urdu.

Majaz was born in Rudauli, Bara Banki, UP, India. He received his early education in Lucknow and Agra, and did his B.A. at Aligarh Muslim University. He considered Fani Badayuni as his 'ustad'.
He hails from a family of poets and litterateurs. Muztar Khairabadi, one of the great masters of Urdu poetry, was among his ancestors.He has a sister Safiya, who married to Jan Nisar Akhtar, father of Javed Akhtar. 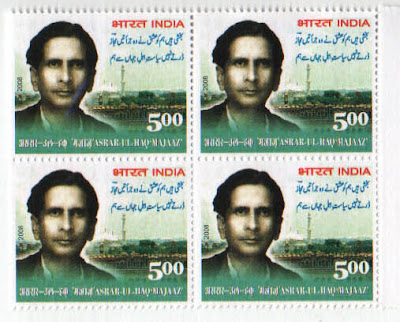 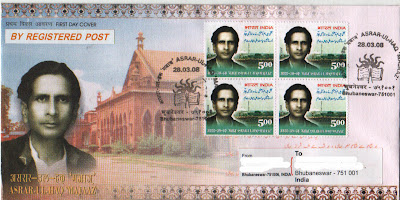 Majaz started writing poems while in Aligarh and soon became a popular among the masses and well respected among the literati. He became one of the front-ranking poets of the taraqqi pasand tahreek or Progressive Writers’ Movement.
He is also well-known for composing the anthem, tarana, for Aligarh Muslim University, 'Ye meraa chaman, hai mera chaman, Main apne chaman ka bulbul huun.' "Aahang" and "Saaz-e-Nau" are two of his poetry compilations.
Majaz was madly in love with a woman. She married another man which he could not come to terms with. His poetry was greatly influenced by her and he remained unmarried all his life.

After liberation of India, condition deteriorated and with the help of Josh Malihabadi Majaz was sent to the mental hospital of Raanchi. There he met kazi Nazrul Islam and recognized the poet. It is reported that he told the poet, "Why are you silent Nazrul, Lets go to Lahore/Dhaka, though they are in foreign country, there are asylums!"

Majaz, a heavy drinker, died alone in a tavern located in the Beldari Lane of Lalbagh, on the cold winter night of 5 December 1955 in the heart of the city of Lucknow.