Zafar Saifullah was the first and only Muslim to be appointed Cabinet Secretary of the Government of India from 1993 to 1994. He belonged to the Karnataka cadre of Indian Administrative Service officers. Prior to his role as Cabinet Secretary, he held a variety of positions including that of Member Secretary of the Minorities Commission of India, Advisor to the Governor of Haryana, Secretary of Rural Development, Government of Karnataka, among others.
In 2008, Saifullah edited and published a book, Sulaimanis – Lives Less Ordinary. The book was released by the Vice-President of India Hamid Ansari. 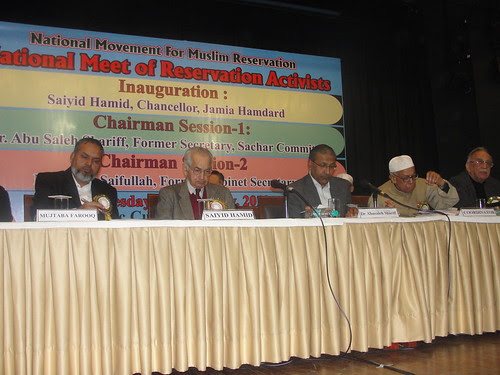 The Vice President, Shri Mohd. Hamid Ansari releasing the book “Sulaimanis : Lives Less Ordinary”, edited by Shri Zafar Saifullah, in New Delhi on September 01, 2008.
The Chief Minister of Delhi, Smt. Sheila Dikshit and the Deputy Speaker, Rajya Sabha, Shri K. Rehman Khan is also seen.
Mr. Zafar Saifullah was an illustrious member of the Indian Administrative Service, having held the top most post of the Cabinet Secretary to the Government of India. Mr. Saifullah has held various positions of responsibility in the Government of India, several State Governments and several Public Sector Undertakings, including: