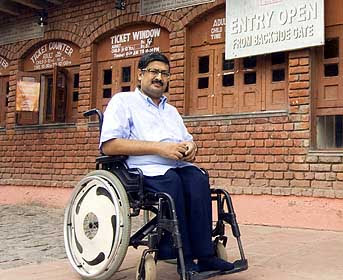 Director, National Centre for Promotion of Employment for Disabled People

Founder of the Disability Rights Group


Javed Abidi is the director of the National Centre for Promotion of Employment for Disabled People (NCPEDP) in India, and the founder of the Disability Rights Group.
He received an education in journalism and communication at Wright State University in Dayton, Ohio.
He set up the disability wing of the Rajiv Gandhi Foundation in India, after being invited to do so by Sonia Gandhi.

Javed Abidi, Director, National Centre for Promotion of Employment for Disabled People, has been short-listed for prestigious Guardian Achievements in International Development Award 2009. He is one of the five chosen from various fields from across the globe for the award.
Abidi has made it to the top 5 from 95 other nominations from around the world. He is the only Indian and the only one from the subcontinent to have made the top 5. And yes, he is also the only one in the top 5 from the disability sector, worldwide. 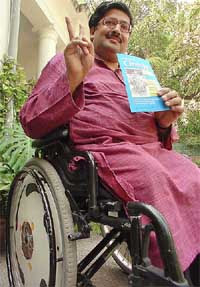 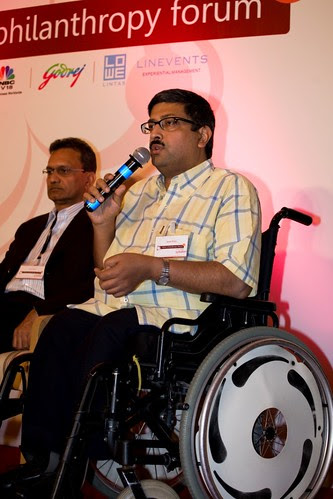 Javed was born in Aligarh, once a renaissance city known for progressive education. His father was a college lecturer and later a respected member of the Congress party.

Inaccurate medical diagnosis confined Javed to the wheelchair . When he was very young. He suffers from sclerosis of the spine, and his disability could well have been controlled with timely medical intervention. However, Javed took on the active role of "ambassador for disability" when he was still in high school. When he was ten years old, his father took him to the United States for treatment where he saw the comparative respect with which the orthopedically disabled live and the empathy of the environment to disability.

Javed returned to the United States in 1995 for treatment and education in journalism and communication at Wright State University. Javed became an active member of the disability unit of the University and in other campus activities while also achieving high academic honors. However, on his return to India, jobs eluded him as most publication editors he approached did not consider the task of political reporting appropriate for him. Constrained by his disability while very highly qualified, Javed experienced employment frustrations that are common to many of the disabled Indian population. But it was a matter of time before he established his credentials as a respected political journalist. Javed Abidi is working to make legislative rights and economic opportunities a reality for the disabled in India. He is organizing disability groups across thematic, geographic, and language barriers to set up an informed national lobby. Simultaneously, he is establishing partnerships with business and the government to create equitable employment of the disabled.

Javed Abidi, affected at birth with a spinal malady and confined to the wheelchair by medical negligence, is working to provide political visibility and economic opportunities for disabled persons. In 1994 he founded the Disability Rights Group.  The National Advocacy Network) to work specifically on cross-disability issues, particularly the drafting and passage of the Disability Act of 1995. He rejuvenated the Indian chapter of Disabled People's International, a worldwide organization of people with disabilities, and mobilized the emergence of several grassroots groups across the country. In the process, Javed has introduced cross-disability culture to the movement. This has been vital for getting groups dealing with physical and mental disabilities to learn of, and listen to, each other. He sees the lack of information-sharing and communication between disability groups as having kept them apart and virtually disinterested in larger issues of the field. Thus he is spearheading nationwide surveys and researches – the first in the history of the movement – to assess the roles, potential, strengths, and weaknesses of the citizen, business, and government sectors vis-á-vis the disabled. The results have exposed grave areas of weaknesses and spurred the movement to address them. Javed has been systematically training these various disability groups in campaigning and negotiating skills, and helping them to campaign in the political arena for disabled rights. Through lobbying and recourse to litigation (in an historic public interest case that will affect considerations of the disabled in Indian airports), Javed is now concentrating on the successful implementation of the recently passed Disability Act. Simultaneously, as head of the National Council for the Promotion of Employment of People with Disability (NCPEDP), he is working with the corporate sector to define clear employment policies for the disabled within their agenda.

In 1993, he was invited by Sonia Gandhi, widow of Rajeev Gandhi, the deceased prime minister of India, to set up the disability wing of the newly established Rajeev Gandhi Foundation. Javed accepted the offer because, "quitting journalism would not harm the industry, but refusing the offer would mean turning my back on so many things that I was angry about–not my disability, but the attitude of people to my disability," he says. It was a long, hard climb. Javed was learning everything afresh as a development professional. His intuitive feel for the issues as a disabled person were meshed with a hard, professional analysis of what works and what does not in the sector. For three years, he set up the disability wing of RGF single-handedly and imbued a completely fresh perspective to the organization as well as the sector at large. The component of matching grants and accountability was introduced to help partners of the disability wing of RGF move from charity to more professional approaches to the sector. Later, Javed set up the NCPEDP in collaboration with RGF and Action Aid.