Mohsina Kidwai was born in Banda, Uttar Pradesh to Mulla Qutub-ud-din Ahmad and Zehra Khatoon mainly from Ahmadpur a small village in Barabanki district. She did her Intermediate from Women's College, Aligarh, Aligarh Muslim University, Aligarh.

Mohsina Kidwai has held several ministerial offices in Government of Uttar Pradesh and Government of India.
Mohsina Kidwai was recently in the running for the position of President of India but was dropped in preference of Pratibha Patil then Governor of Rajasthan.
Kidwai has held a variety of leadership positions within the Congress party including General Secretary of AICC. Kidwai is known for her proximity to Congress Party Chief, Sonia Gandhi.
Kidwai was a leader of breakaway party, Congress(T) in the pre-Sonia Gandhi days.
Currently she is a member of Rajya Sabha, elected from Raipur, Chattisgarh.
She is also member of Congress Working Committee and convenor of Manifesto Implementation Committees of Assam and Punjab. 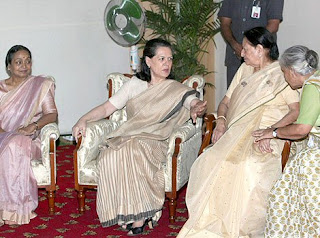 Mohsina Kidwai was married on 17 December 1953 to Khalil R. Kidwai. She has three daughters.

She has held following positions during her career: