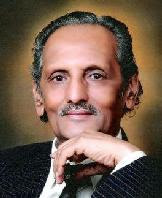 K.S. Nissar Ahmed (Kannada: ಕೆ.ಎಸ್.ನಿಸಾರ್ ಅಹಮದ್, born February 5, 1936) is a prominent Indian poet and writer in Kannada language. His full name is Kokkare Hosahalli Shekar Nissar Ahmed. His father K.S. Haider was a sanitary inspector and a teacher before joining the Revenue Department in Bangalore. He is a post-graduate in Geology, worked as an Assistant Geologist in The Mysore Mines and Geology at Gulbarga before coming in touch with Kuvempu and was invited to the Kannada poet's meet during dasara festival in 1959. He worked as a lecturer in geology in Central College, Bangalore and then in Chitradurga. Later he taught in the Sahyadri First Grade College in Shimoga for two terms during 1967-72 and 1975-1978.
He is better known for Nityotsava (ನಿತ್ಯೋತ್ಸವ). In 1978, when the first audio cassette in Kannada light music was released, the song Nityotsava became popular, not only because of the tune, but also because of the lyrics.