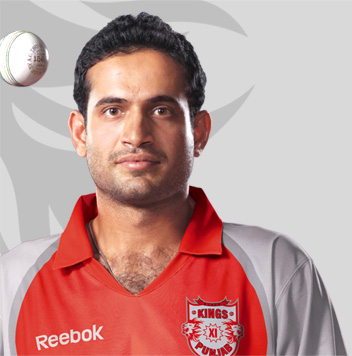 Irfan Pathan (Hindi: इरफ़ान ख़ान पठान,Urdu:عرفان خان پٹھان)  born October 27, 1984 in Baroda, Gujarat, India) is an Indian cricketer who made his debut for India in late-2003 and was a core member of the national team until a decline in form set in during 2006, forcing him out of the team. Since then, he has been in and out of the limited-overs team, and has only sporadic appearances in Test cricket. Pathan was trained by the 'King of Swing' Wasim Akram.
Beginning his career as a left-arm fast-medium swing bowler, Pathan broke into the national team soon after turning 19, and evoked comparisons with Pakistan's Wasim Akram, regarded as one of the finest left-arm pacemen of all time, with his promising performances and prodigious swing. He cemented his position in the team and was named by the International Cricket Council as the 2004 Emerging Player of the Year. In late-2004 he took 18 wickets in two Tests against Bangladesh, but the start of 2005 he performed poorly and conceded runs at a high rate, leading to a brief exile from the one-day international (ODI) team. Immediately thereafter, Australian Greg Chappell, one of the leading batsmen of his time, became India's coach and identified Pathan's batting potential. The bowler improved his batting skills to become a bowling all-rounder, and he opened the batting on occasions in ODIs and scored 93 in a Test match in the role after an illness to Virender Sehwag. He made three scores beyond 80 in the space of four Test innings. For the first nine months of Chappell's stint at the helm, Pathan performed strongly with both bat and ball, scoring runs regularly and frequently taking top-order wickets. He rose to No. 2 in the ICC's ODI rankings for all-rounders and was also in the top five in the Test rankings. This led critics to compare him to former Indian pace bowling allrounder Kapil Dev. In early 2006, Pathan became the first and only bowler to take a Test hat-trick in the first over of the match. However, the productive run did not last and after the start of 2006, Pathan began to steadily lose pace and swing, and his wicket-taking dwindled. Although Pathan's batting continued to be productive, he was not regarded as a specialist and was dropped from the team in both Tests and ODIs by the end of 2006, and by 2007 was no longer in the squad.
He returned to international cricket in September 2007 for the inaugural World Twenty20, where he took three wickets and was man of the match as India beat Pakistan in the final. This earned him a recall into the ODI team, where he was a regular for most of the next 12 months before being dropped as his economy rate continued to trend upwards. In late-2007 Pathan was recalled into the Test team and hit his maiden Test century, but could not maintain his place in the team as his bowling was not effective enough with only two pacemen needed. He continues to perform with both bat and ball at domestic level, although his sedate pace is frequently criticised as being irrelevant at international level. 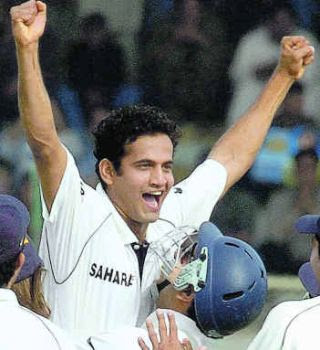 
Pathan grew up with his half-brother Yusuf in a mosque in Vadodara, in an impoverished family. His father served as the muezzin. Although their parents wished them to become Islamic scholars, Pathan and his brother took an interest in cricket. Their games on the grounds off and inside the mosque often necessitated apologies from their father to Muslim worshippers who visited it. In the beginning his deliveries did not reach the other end of the cricket pitch, but rigorous six-hour training sessions in blazing heat and his family's sense of discipline saw him progress steadily. Under the guidance of former Indian captain Datta Gaekwad, Pathan rose to get selected in the Under-14 Baroda cricket team, and when he was selected at Under-15 level to represent Baroda in a national tournament, he was finally presented with a full set of cricket equipment, having before been restricted to second-hand gear due to his family's limited economic means.
In December 1997, Pathan broke into the Baroda Under-16 team, less than two months after turning 13. He took a total of 1/35 and scored 1 and 11 against Gujarat and was dropped immediately afterwards. He did not play again for the Under-16s for two years, and in November 1999, less than a month after turning 15, he made his next appearance, this time for Baroda Under-19s against Maharashtra. He scored 61 and 9 and took a total of 3/41 in a victory, but was immediately dropped back to the Under-16s for the next match, and spent the rest of the 1999–2000 season there. He bowled short spells in the younger division, taking four wickets at 38.00 in six matches, averaging less than seven overs an innings. He had more success with the bat, scoring 253 runs at 31.62 including a best of 72 against Mumbai. 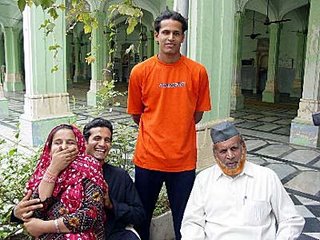 Pathan was then selected for the India Under-15 team in mid-2000 to play a series of matches against their colleagues from other countries. He took 15 wickets at 12.66 in ten matches, including a best of 3/2 against Thailand, and scored 15 runs at 7.50. India won all but one of the matches, most by enormous margins.
At the start of the 2000–01 season, Pathan was immediately back in the Under-19s, this time bowling more, often delivering more than 20 overs per innings. In four matches, he scored 102 runs at 102.00 including a best of 63 not out, and took 10 wickets at 32.50. He was then promoted to the Under-22s, where he scored 44 and took 4/71 in his first match against Saurashtra, prompting the Baroda selectors to propel him into the senior team. Yusuf Pathan (Urdu: یوسف خان پٹھان) (born 17 November 1982) is an Indian cricketer. Pathan made his debut in first-class cricket in 2001/02. He is a powerful and aggressive right-handed batsman and a right-arm offbreak bowler. His brother Irfan Pathan is also an Indian cricketer. Though younger than Yusuf, it was Irfan who entered the Indian team first.


Following his impressive performances in the 2007 Deodhar Trophy and the Inter-state domestic Twenty20 competition held in April 2007, Pathan was made a part of the Indian squad for the inaugural Twenty20 World Championship, held in South Africa in September 2007. He made his Twenty20 international debut in the final against Pakistan. He opened the batting for India in the match, and scored 15 runs in the process. After a good domestic season in 2007/08, he was signed by the Rajasthan Royals in the Indian Premier League for USD 475,000 (INR 1.9 crore). In the 2008 IPL season, he scored 435 runs and took 8 wickets. He recorded the season's fastest half century (from 21 balls) against the Deccan Chargers,  and was also the Man of the Match in the final against the Chennai Super Kings. pathan consider as one of the finest hitter on the cricket ball
Following his good showing in the IPL, he was selected for the Indian one-day team. After the IPL though he played all the games in the Kitply Cup and Asia Cup he got to bat only four times. He could not perform very well with the bat and the ball in the Asia Cup and in the Kitply Cup and so he wasn't selected for the Series.against Sri Lanka. He performed well in domestic circuit and impressed the selectors and was selected for the England ODI series in November. He scored a fifty off just 29 balls in the second ODI against England in Indore, on his 26th birthday.
Yusuf had made his One-Day International debut for India against Pakistan at Dhaka on 10 June 2008. He became a regular feature of the national One-Day International team, but has yet to make his test debut.
Even though Pathan could not repeat his first IPL performance in the second season, he was selected in the Indian team to play the 2009 ICC World Twenty20 championships in England. In the second of the Super 8 matches of India, he made an unbeaten 33 from 17 balls against England, despite his team losing the game and crashing out of the tournament before the semi-finals.
In late-2009, Pathan was dropped from the limited overs team after a series of unproductive performances and the allrounder's position was taken over by Ravindra Jadeja.
In the final of the 2010 Duleep Trophy cricket tournament, Pathan scored a hundred in the first innings and a double hundred in the second and led his team West Zone to a three wicket win over South Zone. Pathan made 108 in the first innings and an unbeaten 210 from 190 balls in the second innings. This became a world record in cricket for the highest successful run chase in first class cricket history.
On 13 March 2010, Pathan scored a century off 37 balls, in an Indian Premier League match against Mumbai Indians. The innings also included record 11 consecutive hits to the boundary (6, 6, 6, 6, 4, 4, 6, 4, 4, 4, 4). 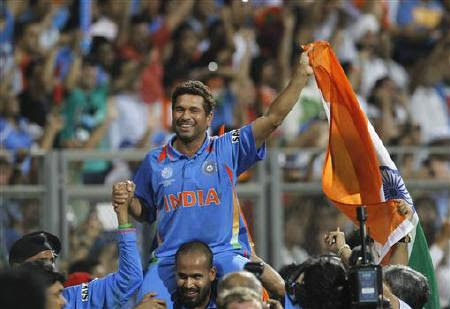 After that knock where he scored the fastest IPL century his Rajasthan Royals skipper Shane Warne described his innings as one of the best innings he has even seen in his career and also compared Yusuf Pathan with his country-mate Andrew Symonds as these two are the clear hitters of the ball.
Also Yusuf Pathan was named as the Vice Captain for Rajasthan Royals during IPL 3.
On 7 December 2010 Pathan magic seals win for India. Pathan clobbered the New Zealand attack with his aggressive innings, Yusuf Pathan smashed an unbeaten 123 from 96 balls and shared an unbroken 133-run partnership with Saurabh Tiwary to guide India to a huge target of 316 with seven balls to spare and give the hosts a 4-0 lead in the series. He was named man of the match. The all-rounder clubbed seven fours and seven sixes on the way to his maiden one-day century to help the hosts overhaul New Zealand's challenging 315-7 with seven balls to spare at the Chinnaswamy Stadium in Bangalore.
At the awards distribution ceremony he stated that "this knock will boost my career".Indian captain Gautam Gambhir said "I have always said Pathan can finish games on his own, and that's what he did today, I had never seen something like this before. But I knew till the time Pathan was there, we would win the game."
New Zealand skipper Daniel Vettori said "It was a great game of cricket, we were in the game, but Pathan was pretty amazing and took the game away from us."
In the 2011 IPL auction, he was bought for whopping $2.1 million by Kolkata Knight Riders.
In the MTN ODI series against South Africa before the 2011 World Cup, he gave a stand out performance in a match against South Africa in Pretoria where he scored a brilliant 105 in 70 deliveries (comprising 8 fours and 8 sixes), even though India lost the match, his performance was complimented heavily. During this knock, he reached his century off 68 balls which is the sixth fastest by an Indian and the second fastest by an Indian outside the subcontinent. Thanks to his stream of good performances, he made it to the Indian team for 2011 World Cup. and also scored 100 for just 37 balls vs Mumbai Indians in IPL 2010 Though Yusuf did not have a great world cup, he ended up having the winner's medal and the honor of holding the world cup aloft.
Yusuf Pathan in IPL 2011 Matches 13 Runs 221 Balls 150 Top Score 47 not out Average 27.62 Strike Rate 147.33