Syed Mohammad (S.M.) Hadi (August 12, 1899 – July 14, 1971, Hyderabad, Andhra Pradesh, India) was one of the most gifted pioneering athletes of India. He not only represented India in cricket and tennis, but was also proficient in field hockey, soccer, table tennis, chess, and polo. He was nicknamed "Rainbow Hadi" because of his expertise in these seven sports.

Hadi's father, Captain Syed Mohammed, was an officer in the Paigah army in Hyderabad State and died when Hadi was barely two years old. Nawab Moin-Ud-Dowlah, a leading aristocrat in the court of the Nizam of Hyderabad became his guardian and under his care Hadi flourished.
Hadi learned horse riding and polo as a youth and played soccer for Nizam College. Recognizing his ward's exceptional athletic abilities, Moin-Ud-Dowlah helped arrange for his studies in England. 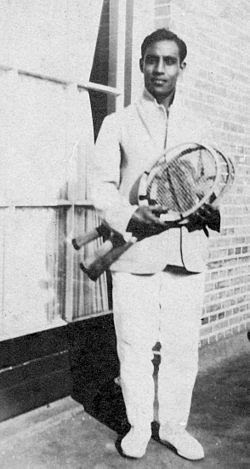 As a tennis player Hadi burst on to the international scene while studying at Cambridge University where he studied at Peterhouse and worked hard to become a Cambridge Blue. He helped the Cambridge team score a series of victories against Oxford University and visiting American teams. He also earned university colors in field hockey, soccer, and table tennis.
Denied the captaincy of the Cambridge team because he was an Indian, he vindicated his claim by representing India at the Davis Cup in 1924 and 1925. He also represented India at Wimbledon for five years and in 1926 reached the quarter finals in doubles. He was one of the first Indians to compete as a tennis player at the Olympics (1924 Summer Olympics).

As a cricketer he played several first-class cricket matches in India, including an unofficial Test. When the Ranji Trophy was instituted in 1934, Hadi became the first batsman to score a century. He was the treasurer of the Indian team on their tour of England in 1936 and also played in several matches. He was also on the team in the unofficial Test match series against the Australians led by Jack Ryder. He continued to play for the Hyderabad XI in the Ranji Tropy till 1941. Many of his siblings were also accomplished sportsmen. His brothers Hussein Mohammad and Ashgar Ali were first class cricketers.

Hadi was the founding member of the Hyderabad Football Association and the Hyderabad Cricket Association. After retiring from athletics, Hadi continued his involvement in sports as an educator. He had an MA from Cambridge and a Masters from the University of Pennsylvania. Hadi was the Director of Physical Education in Hyderabad and ultimately became Joint Secretary of Education in the Indian Government. His brother Syed Ali Akbar was also a prominent educator of Hyderabad. Hadi was an avid supporter of the Scout Movement and received the Wood Badge. He was the National Commissioner of the Boy Scouts of India.
When the All-India Council of Sports was formed in 1959 he became its first secretary.

Surrounded by family and friends Hadi died in his native Hyderabad, Andhra Pradesh, of lung cancer at the age of 72. In an obituary published on September 3, 1971 the Indian Express wrote - "It is but given to a few and seldom to shine in so many sports." The man who adopted him, Nawab Moin-Ud-Dowlah, was also a great patron of cricket in India. The Moin-Ud-Dowlah Gold Cup Cricket Tournament is played to this day. It is only fitting that the runner up trophy is now called the S.M. Hadi Memorial Trophy.