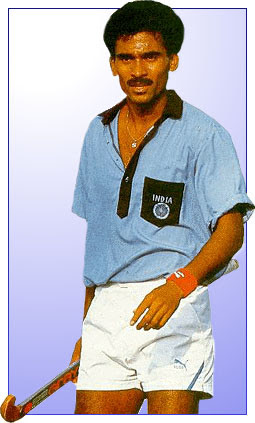 Mohammed Shahid (born 14 April 1960) is a former field hockey player from India. A dashing forward with the ability to weave past any defence with his amazing dribbling skills. He was a member of the Indian team that won the gold medal at the 1980 Olympic Games in Moscow and was captain of India during 1985-86. Apart from being known as the worlds best dribbler, Shahid was essentially an inside-left whose speedy runs in tandem with left-out Zafar Iqbal made a mockery of most defences. Born at Varanasi in Uttar Pradesh, he first played for India in the Junior World Cup in France in 1979. He was awarded Arjuna Award in 1980-1981 and Padma Shri in 1986. He is leading a retired life now. 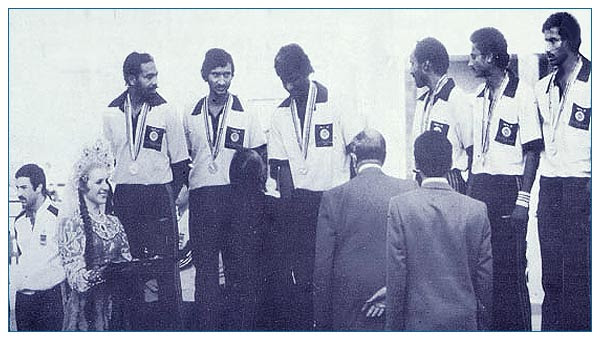 At the age of 19 years he was selected for the Junior Indian Hockey team participating in the Junior World Cup held in France. Just within a short span of one year, he was able to find a place for himself in the Senior National Hockey team of India that represented the nation at International Hockey Tournament, Kuala Lumpur and Champions Trophy Tournament, Karachi in 1980.
Although the Indian squad didn’t fare quite well at the Karachi tournament, Mohammed Shahid was named as the Best Forward of the Tournament over there. Further, he represented the Indian team at the Moscow Olympic Games 1980, where the squad managed to grab the Gold Medal successfully. He also played at the World Cup Hockey Tournament 1981-82 held at Bombay (now Mumbai), wherein the Indian team finishted at 5th place. Afterwards, he participated in the Champions Trophy Hockey Tournament, Karachi in 1983 & 1984, and played at Esanda World Hockey Tournament held at Perth, Australia.
Shahid was a part of the Indian Hockey team that played at Los Angeles Olympic Games 1984 and Seoul Olympic Games 1988, although the Indian team couldn’t get any medal at these events. He also represented the Indian team at Delhi Asian Games 1982, getting the nation a Silver Medal, and Seoul Asian Games 1986, grabbing a Bronze Medal for the team. Owing to his brilliant performance at the Seoul Asian Games 1986, he was selected for the Asian All Star Hockey team. Shahid played for the Indian team at London World Cup Hockey tournament 1986, where the Indian squad could only manage to secure 12th position.
Other Achievements Mohammed Shahid had excellent dribbling skills and was said to be the Best Dribbler in the World. As an employee of the Indian Railways as a Welfare Inspector, Mohammed Shahid has represented the Indian Railways Hockey team in a number of National Hockey Championships, and even got the team a National Championship Title in the year 1988 played at Delhi. He has also led the Indian Hockey team as its Captain during the year 1985-86.
Awards As an honor to his outstanding services to the nation in the sport of Hockey, Mohammed Shahid was conferred upon Arjuna Award in the year 1980-81. Further, he was also honored with the Padma Shri award in the year 1986.
Mohammed Shahid has managed to stay away from the limelight with the same ease he evaded defenders. Crest revisits the genius of dribble.
It's always something meeting a forgotten childhood hero. It's like running into an old teacher, and it's invariably a new education.