Mohammad Yunus Saleem (1912– 15 January 2004) was an Indian politician, scholar and lawyer.He was born in Manoha, near Lucknow.He was known for his simplicity and integrity.He was also active in both religious and political fields, and never compromised in his ethics.The Mohammad Yunus Saleem Memorial Education Trust had been established in his honor by his son Junaid Abdul Rehman to promote the study of the holy Quran.he was also a poet who struggled to make Urdu the second official language.He was also a devouted Muslim, who regularly observed Namaz and never missed Roza

LIFE
(1912–2004) Born in 1912 in Lucknow, he studied at the Christian Mission College in Lucknow then did his BA and LLB at Osmania University in Hyderabad. He was a politician, scholar and lawyer. As a politician, he was an active senior Indian National Congress member who represented Lok Sabha and served as cabinet member in different ministries. When the Congress Party split in the late 1970s he was a member of the Parliamentary Board of Congress (Urs) and as the party localized to Maharashtra under Sharad Pawar, he joined Choudhary Charan Singh's Lok Dal. He was the Vice President of Lok Dal and also a member of its parliamentary board. During the Congress Party's expulsion of V. P. Singh in 1987 and the formation of Jan Morcha, he joined the newly formed party. He played an active role in bringing all parties together and in the formation of Janata Dal. As a lawyer during his early career, he worked as an assistant to Barrister Mohammed Wasi at Hyderabad High Court. He lived in a house in Urdu Galli, now behind the Ram Krishna theatre, Hyderabad. Lalu Prasad Yadav (right) being sworn in as the 25th Chief Minister of Bihar by the Governor Mohammed Yunus Saleem (left) at the JP Memorial Chowk, Ganesh Maidan in Patna on March 10, 1990


Before moving to Hyderabad, he lived in Lucknow with his father in a mosque. He was quite ambitious and a bright student. When the Nizam of Hyderabad Asaf Jah VII (Osman Ali Khan Bahadur who ruled Hyderabad between 1911 and 1948) was in Lucknow on a state visit to see Sir William Malcolm Hailey, home member of the Executive Council of the Governor-General of India, Yunus went to meet the Nizam and offered him a very rare manuscript of the Holy Quran. The Nizam was very impressed with this selfless gesture and asked his Prime Minister Mir Yousuf Ali Khan, Salar Jung III to nominate him for a scholarship so that he could continue his studies. When Yunus didn't receive the scholarship even after a quite long wait he went to Hyderabad. Despite continuous follow, he never ended up receiving a rupee that the Nizam had awarded. Mohammad Yunus decided to remain in Hyderabad and took on students as a source of his livelihood and enrolled himself at the University. He was keenly interested in Urdu and from a very young age wrote poems. It was once he settled in Hyderabad that he added his pen name Saleem in his name and hence forth was known as Mohammad Yunus Saleem.
He died on January 14, 2004, following a brief illness. He is survived by his two daughters Zeba and Shehla and son Junaid Abdul Rehman.

Allah Noorus Samawaat wal ard is a collection and explanation of all verses of the Quran describing Allah. Allah Noorus Samawat provides an insight into Islam’s concept of God, His functions and His attributes.
Noor ul mubeen is his second book, a collection and explanation of all the verses of the Quran which explains what the Quran says about itself.
He served as the founding member, Trustee and General secretary of the Aiwan-e-Ghalib. He was the Founding member and President of the All India Khusro Society
He has authored a book on Ghalib. "His work on Diwan-e Ghalib Lughat-e-Ghalib is a thesaurus on the Diwan wherein difficult words, idioms and phrases have been explained together with illustrations of how the same words have been used by other poets.#REDIRECT


1967 Member of Parliament (MP) from the Nalgonda (Lok Sabha constituency)
1967-71 Minister of Law, Justice, and Waqf
1967-71 Deputy Minister of Railways
1971 Contested Lok Sabha from Aligarh and lost.
1974 he was elected to the Rajya Sabha from Andhra Pradesh.
Late 1970s member of the Parliamentary Board of Congress (Urs).
Vice President Lok Dal and also a member of its parliamentary board.
1990 The Governor of Bihar
1991 MP from Katihar (Lok Sabha constituenc)
1996 Rejoined Congress and remained with INC till his death in 2004.
Positions held as expert of Law
He practised at Andhra Pradesh High Court and also in the Supreme Court, as a lawyer, Minister of Law, Justice, and Waqf. 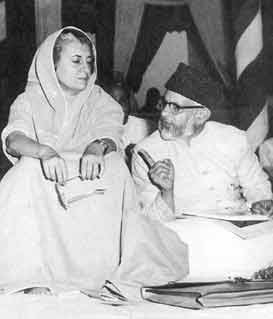 Yunus Saleem with Indira Gandhi
With the demise of Mohammad Yunus Saleem, former governor of Bihar and union minister, our country, in particular Muslims, have lost a trusted and honest leader of independent India. Saleem died on January 15, 2004 following a brief illness at his Delhi residence. He is survived by his wife Sajida Khatoon, two daughters who are married and settled in the United States and a son Junaid Abdul Rahman who lives in Delhi. 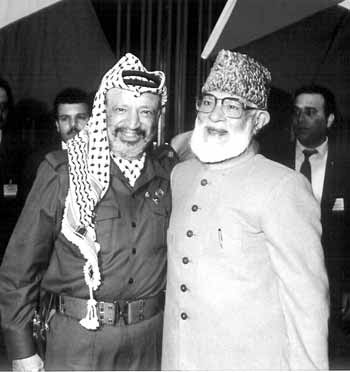 Yunus Saleem with Yasir Arafat
Saleem was a leader who was always active both in religious as well as political fields and never compromised with his principles of simplicity and integrity.

Yunus Saleem was born in Mahona near Lucknow in 1912. He did his High School from Church Mission School at Lucknow and earned his B.A and LLB degrees from Osmania University of Hyderabad. He practiced law at Andhra Pradesh High Court and also in the Supreme Court. In 1967 he was elected to Lok Sabha from Nalgonda constituency in Andhra Pradesh. This was Congress’s first victory in a typical Communist-dominated constituency. The then prime minister Indira Gandhi inducted him into her cabinet and gave him the portfolio of Law, Justice, and Waqf. Later he was given the portfolio of Railways as well. In 1971 he contested the Lok Saba elections from Aligarh but lost. He was offered the chairmanship of Food Corporation of India, Paper Corporation and was also offered ambassadorship to Saudi Arabia but he refused all these positions as he was keen to serve the community and the country and, in his words, as a 'salaried employee' he could not do what he wanted to.
In 1974 he was elected to the Rajya Sabha from Andhra Pradesh. When the Congress Party split in the late 1970s he was member of the Parliamentary Board of Congress (Urs) and as the party got localized to Maharashtra under Sharad Pawar he joined Choudhry Charan Singh's Lok Dal. He was the Vice President Lok Dal and also a member of its parliamentary board. He played an active role in bringing all parties together and in the formation of Janta Dal. He was appointed governor of Bihar by VP Singh in 1990. Next year he fought and the elections from Katihar constituency in Bihar and entered the Lok Sabha. He returned to the fold of Congress Party in 1996 and remained in it till he died.
Yunus Saleem was a scholar of Urdu and also a poet. He was one of the forefront advocates who fought tirelessly for the demand to make Urdu the second official language. He was general secretary of the Aiwan-e-Ghalib and president of Hazrat Amir Khusro Society. His work on Diwan-e Ghalib Lughat-e-Ghalib is a thesaurus on the Diwan wherein difficult words, idioms and phrases have been explained together with illustrations of how the same words have been used by other poets.

Yunus Saleem was a devout Muslim. He was a regular namazi and never missed Roza. He had a keen eye on Islamic jurisprudence and the religion of Islam in general and was often approached by scholars for guidance.
Saleem wrote three books. Two have been published and the third he had just completed. The two that have been published are ‘Allah Noorus Samawaat wal ard" which is a collection and explanation of all verses of the Holy Quran which describe Allah. Allah Noorus Samawat, tome in 340 pages, provides an insight into Islam’s concept of God, His functions and His divine 99 names or attributes.

The second book Norummubeen is a collection and explanation of all the verses of the Quran which tell us who the Prophet was. His son Junaid Abdul Rehman has decided to establish "Mohammad Yunus Saleem Memorial Educational Trust" to promote research and study of the Holy Quran.