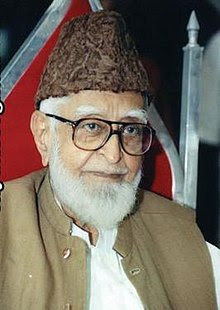 Ebrahim Sulaiman Sait(1922 - 2005) was an Indian politician,former Member of Parliament of India and Founding leader of Indian National League He belongs to Cutchi Memon. He was fondly called "Mehboob -e -Millath"

Ebrahim Sulaiman Sait was born on November 3, 1922 into a rich business family of Mysore Cutchi Memon settled in Bangalore, as the son of Mohammed Sulaiman Sait and Zainab Bai. His mother was from Thalasseri (Tellichery) in Kerala. He completed his primary education in the Brennen High School and Madrassa Yusufiya in his mother’s hometown as the young Sait stayed back with his uncle Tahir Mahmood Moosa. He could not complete his studies at St. Alocious High School in Mangalore owing to his father’s sudden death in 1937. He then shifted to St. Joseph High School and St. Joseph College in Bangalore. After graduating in economics and history, he started teaching in 1943 at Robert Sunpett Government College in Kolar and Marai Melappe Government College in Mysore. He resigned from his teaching post when the establishment prevented government servants from indulging in politics. He married Maryam Bai from Mattancheri, in Kochi. They had five children Khaild, Azra, Razia, Tasneem and Siraj.

Sulaiman Sait had the privilege to share the stage with All India Muslim League’s all time great leaders like Qaed-e-Azam Muhammed Ali Jinnah, Liaqat Ali Khan and Fazlul-Haq, in the 1941 conference held at Madras. Sait was just 19 years old then. He announced his entry into politics through a speech he gave in the Malabar district conference of Muslim Students Federation. One of the greatest Muslim League leaders in Kerala, late K. M. Seethi sahib, was the translator. Seethi sahib was his political guru too. The former had also come from a rich business background and spent nearly everything he had for his party and the community. Sait sahib also did the same with same intensity that he might have internalized from his guru. Qaed-e-Millat Ismail sahib was another great mentor and source of inspiration for Sait. In that generation of selfless community-servers, nobody is left behind today. They offered extraordinary sacrifices and didn’t ever think of making benefits for themselves.

Sait was one of the most noted and acclaimed parliamentarians the democratic India had ever seen. He had been in Parliament for long 35 years representing different constituencies in Kerala: Manjeri, Ponnani and Kozhikode. He was closely known to all prime ministers of India right from Pandit Jawarharlal Nehru. But he was never ready to exploit his fame and influence for personal gains. Nor was he nepotistic. Despite giving good education to his children, Sait never bothered about finding them good posts. When our political leaders synonymised politics with nepotism, he stood at the opposite pole. He used to refuse gifts when it was meant to win favour. 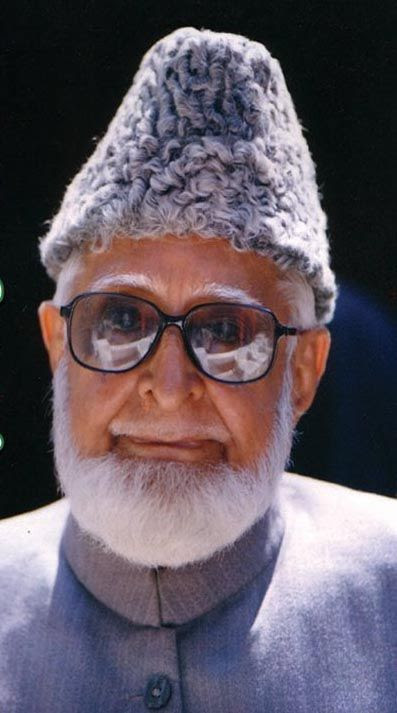 Sait was a very sensitive leader who loved his people deeply. "He was too honest to be a politician," analysts often said about him. But that was the most positive aspect about his political activism. It was his splendor, the secret of his lasting charisma. He was innocent like a child, which caused him to be cheated by even those whom he trusted most. He was an angry young man even in his 80s whenever it came to the issue of injustice towards the minority. He enjoyd unending energy inside. But he didn’t know how to "play" politics: for him, politics was not a game, but a very wise and serious thing to engage in. He never tried to hide his emotions whether in parliament or in a riot zone. His emotions were always for the noble causes. His empathy was for the suffering of his beloved community. Wherever there was a riot, whether in Jabalpur (1962) or Maradu (2002), he didn’t delay his visits to the victims; he minced no words in arguing for justice for the thousands of victims he met. Babri Masjid was a festering wound in his soul. That was the reason why he had to leave Indian Union Muslim League, the party for which he lived and gave his sweat and blood. More than anything else, power, money or fame, he loved his people. He admired the principles that made up his political vision. So nobody could ever silence him. He was a bold leader; and a nice, fine and decent human being.

His speeches are famous both inside and outside Parliament. He spoke with powerful eloquence both in Urdu and English. Kerala was his most influentially popular platform. And the public here knew neither Urdu nor English. Still whenever and wherever Sait was to give a speech thousands of common people gathered there. With respectful and patient silence, they listened to his emotional volcano. Though he always enjoyed eminent translators, the audience never seemed to be in need of them to understand the exploding words that Sait said. Sometimes he literally broke into tears in front of huge gatherings while speaking about the poor and helpless victims of the riots in north India. When he stood on the dais with uncontrollable streams of tears on his cheeks, many of his followers also used to cry. He was a legend in his own lifetime. And like any legend, he was a failure. But what we term as "failure" was his success.

All issues that touched the lives of the Muslim community, in other words all issues that mattered to the secular and pluralistic life of Indian democracy, deeply bothered his mind and thoughts. He forcefully fought to retain the minority status of Aligarh Muslim University. After the Shah Banu case verdict, he pressurised the Centre to bring out Shariah Protection Bill. In other major issues like Jamia Millia Islamia, Babri Masjid, TADA and the seven year-long imprisonment of Abdul Naser Madani, Sulaiman Sait had been taking pain to deal with them all. And for this, he was criticized, misunderstood and punished.

Emerson’s famous quote "to be great is to be misunderstood," was true about Sait too. May be because of his uncompromising stance in favour of his community, though every time justifiable if measured with any scale, many people misunderstood him as a Muslim communalist. Better to say, the media painted him as an extremist. In actuality, he was fulfilling his responsibility towards the people whom he represented. He deeply knew that the Muslim community in India didn’t have an alternative voice to speak for them. He entered that space, filled the vacuum and fought for the underprivileged and the tortured. He was the sole political figure in India who understood the range of insecurity among Muslims in India. But he never cashed in on them, nor did he let it turn out to extremist terrorism. In speeches, he used to quote Quranic verses abundantly. He educated people, reminded the educated ones about the responsibility of being enlightened. In the whole history of Parliament there is no one to be equated with him when it comes to fighting for the rights of the riot victims. Perhaps, the West Bengal MP Syed Badarudduja was another mentionable exception, though for a short term.
Sait once dreamed to transform IUML into a really national organisation instead of remaining confined into the comfortable environs of Kerala. But his colleagues were apparently satisfied with what they had achieved in Kerala: power, influence and followers. By all means Sulaiman Sait deserved to be called Mehbub-e-Millat and was always called so by his people.

The real leaders are those who undertake moral battles they might lose. It requires a lot of courage and wisdom to fight for a cause which may not be popular. He was never afraid of any threats or losses. During the notorious Emergency, when his colleagues in the Muslim League were arrested and tortured, Sait protested boldly. In Delhi, the League leader Iqbal Ahmed Kustiwala and many activists were arrested. Some of their relatives came to Sait and pleaded for his interference. Sait spoke to the Congress President Mr. D. V. Barua over phone and asked for an appointment. The next morning Sait met Barua and plainly asked to arrest him too. It was surprising for the Congress leader. "You’ve arrested my party members and let me free. This is not fair," was Sait’s comment. Barua took him to the then Prime Minister Indira Gandhi to whom Sait bluntly said: "I want to get arrested. I am against the Emergency and compulsory sterilization." Indira knew the power this man had inside. After two days Sait sahib received a phone call from the Prime Minister’s Additional Private Secretary, Mr. R. K. Dhawan, telling him that he could come to the jail and get all his colleagues released. When the Jamat-e-Islami and Students Islamic Movement of India were banned, his was the strongest and most repeated protest demanding the reversal of the government decision.
The Babri mosque demolition was the turning point in Sait’s political life. Perhaps it disillusioned his expectations from many establishments in which he had invested his trust. One might argue that it was a failure of practical foresight. However, Babri tragedy left him a most disappointed and disillusioned man. He wanted to correct the mistake of blindly trusting the Congress. He directly walked to the then Prime Minister P. V. Narasihma Rao and blamed him in his face that he had no right to continue in power. His party was sharing power with the Congress in Kerala those days. He asked his party ministers to quit the coalition as early as possible. But Sait was alone in this view; other IUML leaders were not willing to quit power. He believed that morally the Muslim leadership has no right to sit with those who collaborated with the mosque demolishers. Eventually, after many troublesome bargains inside IUML, Sait was removed from leadership by the national executive of the party. He came out of the party with a dignity glorified by the value of renunciation and formed the Indian National League on April 22, 1994. Since then, for nearly a decade, he painstakingly led the party forward, despite his old age and shortage of money, resources and manpower. "He was not just a leader for our party and each member; Sait sahib was like an affectionate father for every one of us", said P. M. A Salam, the state general secretary of the Indian National League at a condolence meeting at Calicut recently. True, to everyone who met him and interacted with him, he was more than a leader.

Another important thing about Sulaiman Sait was that he was not a narrow-minded man. He tolerated and respected other perspectives too, whether political or jurisprudential. He was an ardent admirer of Allama Mohammed Iqbal’s poetry. He was perhaps the only Muslim leader in India who could meet and spend time with many internationally renowned Muslim leaders like Muhammed Ali Jinnah, Syed Maududi, King Faisal, Imam Khomeini, Yasser Arafat and many others. He spoke in several Islamic conferences held in various parts of the world representing the Muslims of India.
He was one of the founding fathers of All India Muslim Majlis-e-Mushawara. He was its Secretary for a period. He was the founding general secretary of the All India Palestine Conference. He co-founded the All India Muslim Personal Law Board, which was formed in 1972 to protect the Muslim law in India. Similarly he was the first president of the All India Milli Council, which was formed in May 1992. Babri Masjid Movement Co-ordination Committee was also co-founded by Sait. Besides, he was a constant member of many organisations like the Central Hajj Committee, Hajj Advisory Council, Aligarh Muslim University Court etc. He was also a member of the National Integration Council and Central Waqf Council.
His demise has orphaned his party.