Nawab Mohsin-ul-Mulk (Urdu: ﻧﻭﺍﺏ ﻣﺤﺴﻦ ﺍﻟﻣﻟﻙ) (born 9 December 1837 — 16 October 1907) was a prominent Muslim politician. He was a close friend of Sir Syed Ahmed Khan and was involved in the Aligarh Movement and was one of the founders of the All India Muslim League. His real name was Syed Mehdi Ali (Urdu: ﺳﻴﺩ ﻣﻫﺩﻯ ﻋﻠﻰ)


Family and Early Life
Mohsin-ul-Mulk was the son of Syed Mir Zaamin Ali, and was born in the town of Etawah. Most of his early education was in and around Etawah. As per the trends and tradition during that period, he was given a thorough basic education in Persian and Arabic.
In 1867, he sat for the Provincial Civil Service examination and topped the list of successful candidates. He was appointed as Deputy Collector in U. P. In 1874, Mehdi Ali proceeded to Hyderabad to enter into the service of the Nizam. For his meritorious services over nearly 20 years, he was conferred the titles of Munir Nawaz Jang and Nawab Mohsin-ud-Daula by the Nizam of Hyderabad.

During his posting as Tahsildar in Etawah, Mohsin-ul-Mulk met Sir Syed Ahmad Khan for the first time. This meeting resulted in a long lasting companionship and Nawab Mohsinul Mulk became a staunch supporter of Sir Syed’s vision and Mission for the rest of his life. Very few friendships have been as stable and strong as the frienship of these two. Mohsin-ul-Mulk retained a very high level of respect despite difference of opinion for his dear friend. Thereafter Nawab Mohsin-ul-Mulk, became one of the strongest supporters of Sir Syed’s mission and Aligarh Movement.
He became member of the Scientific Society from its inception in 1864. He wrote passionate articles in Tahzeebul Akhlaq to support Sir Syed’s vision and spread his mission and became a spokesperson of Sir Syed’s social thoughts and the Aligarh Movement.
Regarding Sir Syed Ahmad Khan’s visit to England, Nawab Mohsinul Mulk wrote a letter to Honorable Haji Ismail Khan:


When Sir Syed formed THE COMMITTEE OF THE SUPPORTERS OF THE ADVANCEMENT OF MUSLIM EDUCATION, Nawab Mohsin-ul-Mulk was his key companion, and started collecting donations for the cause of the newly formed committee.
Upon retirement from service in 1893 from State of Hyderabad, he came to Aligarh and offered his services to Sir Syed Ahmad Khan to assist him in spreading the message of Aligarh Movement. Upon the death of Sir Syed, he was appointed as the Secretary of the Muslim Educational Conference in 1899.
He also became the successor of Sir Syed Ahmed Khan in all aspects. After Sir Syed’s death in 1898, he became Secretary of the MAO College management and took Sir Syed’s burden on his own shoulders and is regarded with as much respect as his forerunner. He continued the mission of Sir Syed while giving special attention to bring religious and oriental stream scholars together on one platform, i.e. MAO College so that the students could benefit from the scholars to have a proper understanding of religion alongside modern scientific education. He appointed a committee under the Chairmanship of Maulana Habibur Rahman Khan Sherwani to improve the religious studies courses in MAO College.
Mohsin-ul-Mulk remained the Secretary until his death in 1907. He was thus instrumental in the development of MAO College, which eventually became the Aligarh Muslim University in 1920.
In later years, the Aligarh Muslim University (AMU) honored him by naming a Hall of residence after him. The foundation stone of the Hall was laid by the then Vice Chancellor, Mr. Badruddin Mohsin Tyabji on November 4, 1963. It started with an initial strength of 400 and is now one of the largest residential Halls both in size and strength, having 900 students and six different hostels: Allama Shibli Hostel (Previously this was Sir Ziauddin Hostel), Ameen Hostel, Majaz Hostel, Maulana Hali Hostel, Maulana Mohd. Ali Johar Hostel, and Saifi Hostel.

Nawab Mohsin-ul-Mulk, being a farsighted and politically conscious leader, carried on correspondence with the private secretary of the Viceroy to give his point-of-view on the necessity of separate representation for the Muslims in all legislatures and local bodies. He presided over the 9th session of Muhammadan Educational Conference which was held in Aligarh in 1894 where he proposed a resolution to help and support Nadwatul Ulama, the newly formed religious school in Lucknow. His impressive presidential remarks softened the hearts of modern educationists to support the cause of Nadwatul Ulama.
In 1906, he became Secretary of All India Muslim League. Along with Nawab Viqar-ul-Mulk, he was asked to draft the constitution of the League.
Towards the beginning of 20th century, the Hindi-Urdu controversy arose in the United Provinces. Mohsin-ul-Mulk took up the pen in defense of Urdu in collaboration with the Urdu Defense Association. He authored following books;
1. Mazaameen-e-Tahzeebul Akhlaq (Collection of his articles published in Tahzeebul Akhlaq)
2. Taqleed-e-Amal
3. Kitabul Muhabbat-o-Shauq Makaateeb
4. Musalmano(n) ki Tahzeeb
5. Aayaat-o-Bayyanat 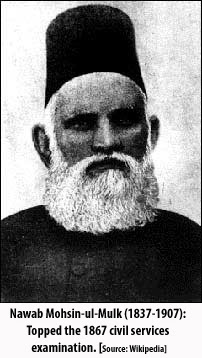 Main Article Urdu Defence Association
The followers of Sir Syed tried their level best to save Urdu language. Mohsin-ul-Mulk was the outstanding person who organized the Muslims in defense of Urdu. Towards the beginning of 20th century, the Hindi-Urdu controversy again flared up in the United Provinces. Mohsin-ul-Mulk took up the pen in defense of Urdu in collaboration with the Urdu Defense Association.
Earlier, the success of the Hindi movement led Sir Syed to further advocate Urdu as the symbol of Muslim heritage and as the language of all Indian Muslims. His educational and political work grew increasingly centred around and exclusively for Muslim interests. He also sought to persuade the British to give Urdu extensive official use and patronage. His colleague, Nawab Mohsin-ul-Mulk] established Urdu Defence Association, committed to the perpetuation of Urdu. To Muslims in northern and western India, Urdu had become an integral part of political and cultural identity. However, the division over the use of Hindi or Urdu further provoked communal conflict between Muslims and Hindus in India.
Sir Syed Ahmed khan and Nawab Mohsin-ul-Mulk's patronage of Urdu led to its widespread use amongst Indian Muslim communities and following the Partition of India its adoption as the official language of Pakistan, The Aligarh Muslim University (AMU) honored him by naming a Hall of residence after him. The foundation stone of the Hall was laid by the then Vice Chancellor, Mr. Badruddin Tyabji on November 4, 1963. It started with an initial strength of 400 and is now one of the largest residential Halls both in size and strength, having 900 students and six different hostels: Allama Shibli Hostel (Previously this was Sir Ziauddin Hostel), Ameen Hostel, Majaz Hostel, Maulana Hali Hostel, Maulana Mohd. Ali Johar Hostel, and Saifi Hostel.
On 16 October 1907, he died in Simla.