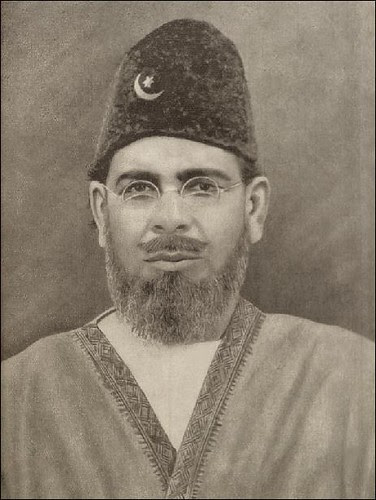 Maulana Mohammad Ali Jouhar (Urdu: مَولانا مُحمّد علی جَوہر) was an Indian Muslim leader, activist, scholar, journalist and poet, and was among the leading figures of the Khilafat Movement.
He was the Sixth Muslim to become the President of Indian National Congress and it lasted only for few months.

Early life
Muhammad Ali, (10 December 1878 – 4 January 1931) well-known as Maulana Muhammad Ali Jauhar (مَولانا مُحمّد علی جَوہر), was born in 1878 in Rampur in India. He belonged to the family of famous Yousaf Zai, a "Rohilla" tribe of Pathans in Rohilkhand, the north west region of Uttarpardesh of India, however, their origin is traced back to the highland of Khyber pukhtoonkhawa, present day Pakistan. His ancestors settled in Rohilkhand, during the 19th century, later they settled in Rampur. However the progeny of Yousuf Zai tribe still found in Afghanistan, the Khyber Pukhtoonkhawa, Pakistan who still maintain Pushto language. He was the brother of Maulana Shaukat Ali and Maulana Zulfiqar Ali. Despite the early death of his father, the family strived and Ali attended the Deoband Madaressah Aligarh Muslim University and Lincoln College, Oxford University in 1898, studying modern history.

Upon his return to India, he served as education director for the Rampur state, and later joined the Baroda civil service. He became a brilliant writer and orator, and wrote for major English and Indian newspapers, in both English and Urdu. He himself launched the Urdu weekly Hamdard and English Comrade in 1911. He moved to Delhi in 1913.
Mohammad Ali worked hard to expand the AMU, then known as the Mohammedan Anglo-Oriental College, and was one of the co-founders of the Jamia Millia Islamia in 1920, which was later moved to Delhi. 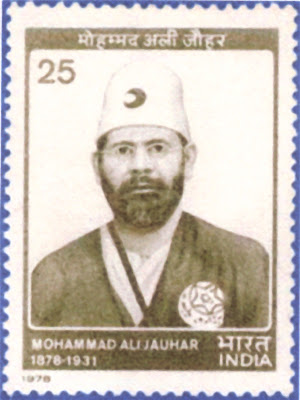 Mohammed Ali had attended the founding meeting of the All India Muslim League in Dhaka in 1906, and served as its president in 1918. He remained active in the League till 1928.
Ali represented the Muslim delegation that travelled to England in 1919 in order to convince the British government to influence the Turkish nationalist Mustafa Kemal not to depose the Sultan of Turkey, who was the Caliph of Islam. British rejection of their demands resulted in the formation of the Khilafat committee which directed Muslims all over India to protest and boycott the government. 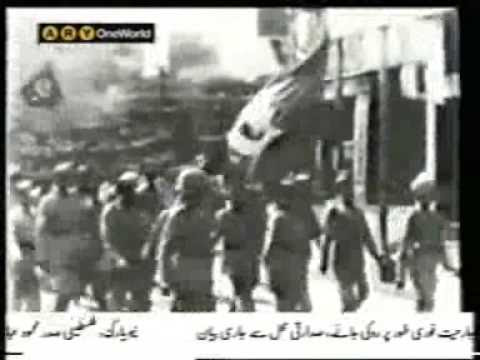 Now accorded the respectful title of Maulana, Ali formed in 1921, a broad coalition with Muslim nationalists like Maulana Shaukat Ali, Maulana Azad, Hakim Ajmal Khan, Mukhtar Ahmed Ansari and Indian nationalist leader Mahatma Gandhi, who enlisted the support of the Indian National Congress and many thousands of Hindus, who joined the Muslims in a demonstration of unity. Ali also wholeheartedly supported Gandhi's call for a national civil resistance movement, and inspired many hundreds of protests and strikes all over India. He was arrested by British authorities and imprisoned for two years for what was termed as a seditious speech at the meeting of the Khilafat Conference. He was elected as President of Indian National Congress in 1923.

Maulana Mohammad Ali was however, disillusioned by the failure of the Khilafat movement and Gandhi's suspension of civil disobedience in 1922, owing to the Chauri Chaura incident.
He re-started his weekly Hamdard, and left the Congress Party. He opposed the Nehru Report, which was a document proposing constitutional reforms and a dominion status of an independent nation within the British Empire, written by a committee of Hindu and Muslim members of the Congress Party headed by President Motilal Nehru. It was a major protest against the Simon Commission which had arrived in India to propose reforms but containing no Indian nor making any effort to listen to Indian voices.

Mohammad Ali opposed the Nehru Report's rejection of separate electorates for Muslims, and supported the Fourteen Points of Muhammad Ali Jinnah and the League. He became a critic of Gandhi, breaking with fellow Muslim leaders like Maulana Azad, Hakim Ajmal Khan and Mukhtar Ahmed Ansari, who continued to support Gandhi and the Indian National Congress. Mohammad Ali said: "Even the most degraded Muhammadan was better than Mahatma Gandhi."
Ali attended the Round Table Conference to show that only the Muslim League spoke for India's Muslims. He died soon after the conference in London, on January 4, 1931 and was buried in Jerusalem according to his own wish. (The reason of his immediate death not known). 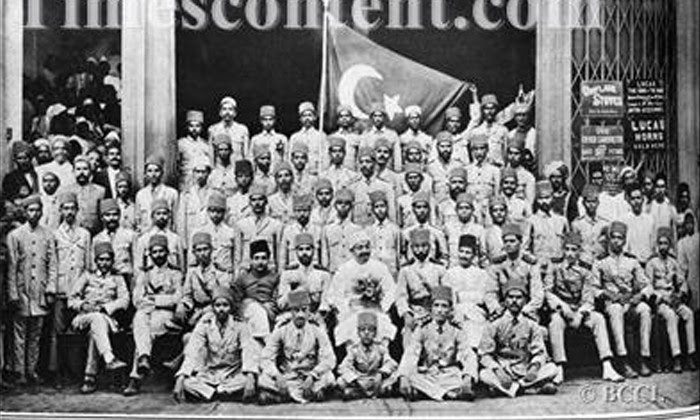 Maulana Muhammad Ali Jauhar (مولانا محمد علی جوہر) is remembered as a fiery leader of many of India's Muslims. He is celebrated as a hero by the Muslims of Pakistan, who claim he inspired the Pakistan movement. But in India, he is remembered for his leadership during Khilafat Movement and the Non-Cooperation Movement (1919-1922) and his leadership in Muslim education.
The famous Muhammad Ali Road in south Bombay, India's largest city, is named after him. The Gulistan-e-Jauhar (Urdu: گلستانِ جوهر) neighborhood of Karachi, Sindh, Pakistan's largest city. Mohammad Ali Co-operative Housing Society (M.A.C.H.S.) in Karachi are named in honor of Maulana Mohammad Ali Johar. Johar Town, Lahore, Punjab is also named after him.
News website TwoCircles.net is inspired by a quote of Maulana Mohammad Ali Jouhar. TwoCircles.net
Ali died at a time when the Pakistan movement had not been formed, and it is a matter of continuing debate if he would have ever supported the idea.
Maualana Muhammad Ali mosque in Singapore is named after him.
Jauhar was not only an upright leader, activist, scholar but also a man of letters. His following Urdu stanza about martyrdom of Hussain ibn Ali has been a slogan for many decades now:
قتلِ حسین اصل میں مَرگِ یزید ہے
اسلام زندہ ہوتا ہے ہر کربلا کے بعد
He along with Gandhi traveled to Britain for attending round table conference sometimes in the 1930s. There he delivered his famous speech which included his wish not to get buried in 'slave India'. During the same tour he fell ill and died in London. Respecting his wish, his followers brought his dead body to Palestine, which was then a British Mandated territory (not in Turkish control), and buried him at Baitul Mukhaddas. Many Indian Muslims with interest in history were wondering if his tomb is still intact. One Hyderabadi scholar Omar Khakidi who was working with MIT, Boston, found Maulana's grave, which was still in good shape.

"I had long been convinced that here in this Country of hundreds of millions of human beings, intensely attached to religion, and yet infinitely split up into communities, sects and denominations, Providence had created for us the mission of solving a unique problem and working out a new synthesis, which was nothing low than a Federation of Faiths... For more than twenty years I have dreamed the dream of a federation, grander, nobler and infinitely more spiritual than the United States of America, and today when many a political Cassandra prophesies a return to the bad old days of Hindu-Muslim dissensions 1 still dream that old dream of "United Faiths of India." — Maulana Mohammad Ali - From the Presidential Address, I.N.C. Session, 1923, Cocanada(now Kakinada).