Sir Osman Ali Khan MP, GCSI, GBE Asaf Jah VII (Urdu: آصف جاہ), born Usman Ali Khan Bahadur (Urdu:  عثمان علی خان بہادر; April 6, 1886 – February 24, 1967), was the last Nizam (or ruler) of the Princely State of Hyderabad and of Berr. He ruled Hyderabad between 1911 and 1948, until it was merged into India. He was styled His Exalted Highness The Nizam of Hyderabad.
During his days as Nizam, he was reputed to be the richest man in the world, having a fortune estimated at US$2 billion in the early 1940s or 2 per cent of the US economy then. At that time the treasury of the newly independent Union government of India reported annual revenue of US$1 billion only. He was featured on the cover of TIME magazine, portrayed as such. The Nizam is widely believed to have remained as the richest man in South Asia until his death in 1967, though his fortunes fell to US$1 billion by then and became a subject of multiple legal disputes between bitterly fighting rival descendants.
He built the Hyderabad House in Delhi, now used for diplomatic meetings by the Government of India. 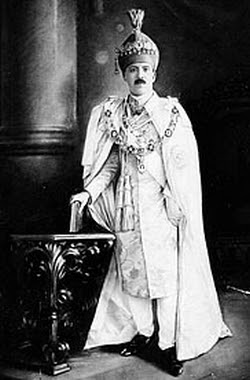 Nawab Bahadur Osman Ali was born on April 6, 1886, at Purani Haveli in Hyderabad, the second son of Nawab siraj ud doalah Mir Mahboob Ali Khan,Asaf Jah VI, by his first wife Amat-uz-Zahrunnisa Begum. The death of his elder brother in 1887, rendered Osman Ali the heir apparent of Hyderabad.
Great attention was paid to his education, and eminent scholars were engaged to teach Osman Ali English, Urdu and Persian. He was also tutored in Islamic studies by Hafiz Anwarullah Faruqi of the Jami'ah Nizamiyyah of Hyderabad.
Mir Osman Ali Khan was a great scholar and wrote poetry in Urdu and Persian. On April 14, 1906,shaik Osman Ali married Dulhan Pasha Begum (1889–1955), daughter of Nawab Jahangir Jung, at Eden Bagh at the age 21. She was the first of his seven wives and 42 concubines, and the mother of two eldest of his sons Azam Jah and Moazzam Jah. His second wife was Iqbal Begum daughter of Nawab Nazir Jung Bahadur (Mirza Nazir Beg)
The first brother-in-law of Osman Ali Khan was Nawab Khudrath Nawaz Jung son of Nawab Jahangir Jung and younger brother of Dulhan Pasha Begum first wife of Osman Ali Khan
Their eldest son, Azam Jah, was married to Durru Shehvar, daughter of Abdul Mejid II (the last Ottoman Caliph and cousin and heir of the last Sultan of the Ottoman Empire). Moazzam Jah married Princess Niloufer, a princess of the Ottoman empire. It has been suggested that through these dynastic marriages, Osman Ali hoped to acquire the Caliphate for his descendants.
In total, Osman Ali Khan sired at least 40 children, including:

A cover story by TIME
On February 22, 1937, Time magazine called the Nizam the richest man in the world. His vast inheritance was accumulated by way of mining royalties rather than land revenue. It should be noted that Andhra Pradesh was the only supplier of diamonds for the global market in the 19th century.
Osman Ali acceded as Nizam of Hyderabad upon the death of his father in 1911. The state of Hyderabad was the largest of the princely states in pre-independence India. With an area of 86,000 square miles (223,000 km²), it was roughly the size of present-day United Kingdom. Its ruler was the highest-ranking prince in India, was one of only five princes entitled to a 21-gun salute, held the unique title of "Nizam", and was created "His Exalted Highness" and "Faithful Ally of the British Crown" after World War One due to his financial contribution to the British Empire's war effort. (For example, No. 110 Squadron RAFs original complement of DH.9As were Osman Ali's gift. Each aircraft bore an inscription to that effect, and the unit became known as the Hyderabad Squadron. 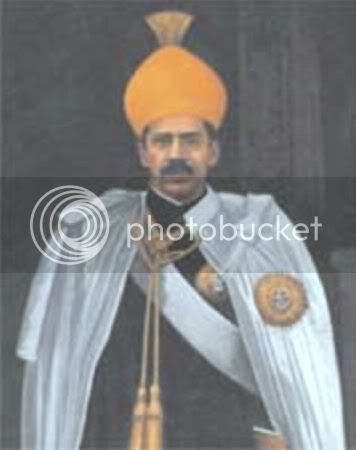 Osman Ali was the absolute ruler of this principality. In some accounts, he is held to have been a benevolent ruler who patronized education, science and development. His 37-year rule witnessed the introduction of electricity, railways, roads and airways were developed, the Nizamsagar lake in Hyderabad state was excavated and some irrigation projects on the Tungabhadra river were undertaken.
In 1941, Mir Osman Ali Khan started his own bank, the Hyderabad State Bank (now State Bank of Hyderabad) as the state's central bank, which managed the Osmania sikka, the currency of the Hyderabad state. It was the only state which had its own currency, the Hyderabadi rupee, which was different from the rest of India. Banknotes of Hyderabad gives a good reference of the banking of that period.
Nearly all the major public buildings in Hyderabad city, such as the Osmania General Hospital, Andhra Pradesh High Court, Asafiya Library now known as State Central Library, Town Hall now known as Assembly Hall, Jubilee Hall, Hyderabad Museum, now known as State Museum, Nizamia Observatory and many other monuments were built during his reign. Up to 11% of the Nizam's budget was spent on education. Osmania University was founded while schools and colleges and even a "Department for Translation" were set up. Primary education was made compulsory and provided free for the poor. The Nizam (as well as his predecessors) have been criticised for largely ignoring the native languages in favor of Urdu.

Osman Ali donated to many institutions in India and abroad. Recipients included educational institutions such as the Jamia Nizamia, the Darul Uloom Deoband, Banaras Hindu University and Aligarh Muslim University.
Hyderabad was the only state in British India where the ruler was allowed to issue currency notes. A 100 rupee note was introduced in 1918.
He also paid for a Royal Australian Navy vessel, N-class destroyer, HMAS Nizam (G38) in.
Osman Ali lived at King Kothi Palace—bought from a nobleman— during his entire life, after age 13. He never moved to Chowmahalla Palace not even after his accession to the throne.

After Indian independence in 1947, the country was partitioned on communal lines and Pakistan was established as a Muslim nation. The princely states were left free to make whatever arrangement they wished with either India or Pakistan. The Nizam ruled over more than 16 million people and 82,698 square miles (214,190 km2) of territory when the British withdrew from the sub-continent in 1947. The Nizam refused to join either India or Pakistan, preferring to form a separate kingdom within the British Commonwealth of nations.
The proposal for independent state was rejected unambiguously by the British government. The Nizam then resolved upon exploring the possibility of independence. Towards this end, he kept up open negotiations with the Government of India regarding the modalities of a future relationship while opening covert negotiations with Pakistan on a similar vein. He also concurrently encouraged the activities of the Razakars. The Nizam cited the Razakars as evidence that the people of the state were opposed to any agreement with India.
Many peasants of the Hyderabad state revolted against the Nizam under the leadership of State Congress and Communist Party of India. Swami Ramanand Teerth and his team fought the battle of freedom on the streets of Hyderabad and other regions. The Telangana peasant armed struggle was successful in driving out local landlords (zamindars), and distributing their land to the landless. Nizam was able to suppress the armed struggle.
However, majority of his subjects were Hindus and his territory was surrounded on all sides by Indian territory. As a result the new Indian government decided to invade and annex Hyderabad in 1948 to support the demand of people of the state.
Indian Forces invaded the state(Operation Polo) in September 1948 after the negotiations failed. After 5 days of fighting when the Indians were knocking at the doors of the capital, he agreed to accede to the Indian Union and received the ceremonial post of Rajpramukh in 1950. But he resigned from this office when the states were re-organised in 1956. Hyderabad was then split along linguistic lines.

Mir Osman Ali Khan Bahadur died on Friday, February 24, 1967. It was the end of a princely era. His funeral procession was one of the largest in Indian history. He had willed that he be buried in the Judi Mosque that faced King Kothi Palace.

His Exalted Highness Rustam-i-Dauran, Arustu-i-Zaman, Wal Mamalik, Asaf Jah VII, Muzaffar-ul-Mulk-Wal-Mamalik, Nizam ul-Mulk, Nizam ud-Daula Nawab Mir Sir Osman Ali Khan Bahadur, Sipah Saula, Fateh Jung, Nizam of Hyderabad and of Berar, Knight Grand Commander of The Most Exalted Order of the Star of India, Knight Grand Cross of the Most Excellent Order of the British Empire, Royal Victorian Chain, Honorable General in the Army, Faithful Ally of the British Governmet.
His Exalted Highness was the honorary Colonel of the 20 Deccan Horse. In 1918, Nawab Mir Osman Ali Khan was elevated by King George V from His Highness to His Exalted Highness. In a letter dated 24 January 1918, the title Faithful Ally of the British Government was conferred on him.
The titles during his life were:

Educational reforms
IN the reigning tenure of mir osman ali khan introduced certain educational reforms which were considered the most memorable achievements under his rule and the most lasting and impressive contribution. He was the founder of Osmania university in Hyderabad, which marked a new era in the annals of British educational policy in India.
As per sir Haidari,the original patagonist of scheme of Osmania university, the state was always patronised for learning and crafts. While agreeing the draft scheme for Hyderabad university the sevennth Nizam in his farmen put forth the objectives for the proposed university. In the forman it was declared that in this university the mordem,the ancient the oriental and western arts and craft should be combined to remove the defacts of the mordern system of education so that one should draw full benefits from the ancient and morden system of education in the, physical intellectual and spiritual fields, and the university with the spread af education there should be a scope of improvement and reforms of the morals of the students.Further in this university there should be no provision of real research facilities in all different sciences. Lastly, the basic principal of this university whould be that Urdu should be the medium of ins truction for higher education; but the study of English as a compalsary subject should be must forevery student.


Befour the establishment of the Osmania university, Hyyderabad had lagged much behind in other British Indian Pravisions in field of education,but at the same time it must be remembered that under the last nizam, Mir Mahboob ali khan the Nizam collage affiliated the University of Madras had already started to function , although the number of graguates it had produced since the inception was very few.Moreover leaving aside the manassaries of in the field of education in the state there also existed in the state two other state of education in the addition of Nizams collage.Taking the things into consideration, members of other comminuties were included in the Academic faculity and in the senate of Osmania university.
Finally Osman ali khan belived that Osmania university beside making higher education universally should also become recognised as an important center of carring out research in the academic fields, both in humanities and all the sciences. Accodingly in 1936 Osmania university established post graguate cources and research facilities in all the sciences:physics,Biology,chemistry,medicin,engeenearing,matellugry ,as well as establishing the faculity of law,Education and teacher training cources.also, with a view of reaching a high standards of proficiency in all these cources,the seventh nizam was very vigilant that the professor and lecturers in these faculities should be men of high calibre and good character.

Thus Osmania universuty by 1948 had reached its full stature, at both Graguate and post graguates levels.Its degrees were accepted not only by the other Indian universities but by the British university as well and its graguateshad started to play their full role, educaionally,polatically,socially and culturally in the life of their states,as well as in the life of their country as a whole.