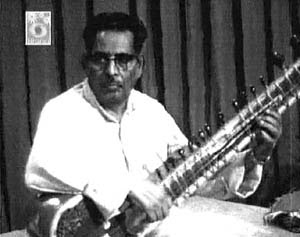 Mushtaq Ali Khan was born in Banaras (20 June 1911 – 21 July 1989) and an Indian aitar, surbahar (and pakhawaj) player. His father Ashiq Ali Khan was a renowned sitar player. His musical ancestor tree includes Masit Sen, the originator of Masitkhani Baaj (a slow tempo instrumental composition). He was recognized as the foremost representative of the Senia gharana (style, musical school) of sitar playing in the mid-20th century.

At first a court musician at Jaunpur, he left the court to pursue an independent career. He started playing for All India Radio in 1929, and performed at the 1931 Sangeet Sammelan (conference) in Allahabad. For all of the 1940s and most of the 1950s he was considered the most prominent sitar player in India, following the demise of Enayat Khan of the Etawah Gharana, and prior to the rise of the young Ravi Shankar and Vilayat Khan in the mid-1950s.. In 1968 he won the Sangeet Natak Akademi Award.
Being a purist, Khan-Saheb refused to yield to shifting popular tastes and to adopt the innovations introduced by Ravi Shankar on one hand and Vilayat Khan on the other, which lead to a gradual decline in his popularity . At the time of his death he was known as a "musicians' musician". Many of India's best known musicians expressed their appreciation of the purity of his style and musicality in a book published in Delhi after his death.

Training and Lineage
Khan started his instruction at the age of 6. He learned from his father, Ashiq Ali Khan, who had learned sitar from the renowned 19th century player Barkatullah Khan, a descendant of Masit Sen of Delhi, the inventor of the Masitkhani gat (the major style of slow musical composition in sitar playing) [4] His name became synonymous with the Senia style  although he may actually have practiced an even more austere style than his predecessors in the gharana . He eschewed much of the ornamentation of modern sitar technique (such as murkhi and zamzama), and embraced a clean, pure sound. His alap was constructed along the lines of a dhrupad alap, and his jod and jhalla derived a lot from been (rudra vina) technique. Oddly enough, in spite of being a musical descendant of Masit Sen, he rarely played Masitkhani gats in public, and none of the commercially available examples of his music includes one. He opted to play the faster Rezakhani gats instead, feeling that playing Masitkhani gats to an undiscerning audience would cause them to be devalued.

MUSHTAQ ALI KHAN was an eminent Sitar player of Senia Gharana (Indian Music School). - And the only SURBAHAR player of India who used to play in BEEN-ANG with 3 MEZRABS (plectrum) and that too, with Pakhawaj as an accompanying instrument only in pure DHRUPAD STYLE.
In a rare exclusive interview in the Daily Telegraph on the 13 July 1985, Khan Sahab narrated the history of this instrument with historical references in which has cleared the myth of this instrument . Khan Sahab had his lineage with fifth vani, called Dhandvani named after one of the forefathers. The famous dhrupadiya of Shah Jahans Court, Nayak Dhundhu. It is also called Rasal Vani for its beauty . …." two of my ancestors, Jaggu Khan and Makku Khan. Since Makku Khan was childless, he adopted Waras Ali Khan a great name who learnt the art of playing Been from Bade Mohammed Khan. When my father Ashiq Ali Khan was six years old, my grand father Sadaq Ali Khan, son of Jaggu Khan died so his uncle Waras Ali Khan taught him all inticacies of Beena on the surbahar. That is why we play Surbahar with three Mezrabs. The Surbahar was originally designed to felicitate the playing of Alap . Those days Alap was the exclusive prerogative of the Beenkar. Ghulam Muhammed Khan and his son Sajjad Mohammed Khan the great SurBahar players used to stay at Calcutta in the earliest part of the 20th Century and taught many renowned players including Imdad Khan and Jnanoda Mukherjee. In this instrument two angas played are alap and talparan and that is why the knowledge of pakhawaj is essential to play the Talparan ….".

Mustaq Ali Khan also had to learn the art of pakhawaj playing in order to achieve perfection in the art of playing the surbahar with Pakhawaj.

Mushtaq Ali Khan was awarded the Sangeet Natak Academy award in 1968 (equivalent to a National Academy Award). In 1973/74 he received the title of D.Litt from Rabindra Bharti University. The Indian government appointed him as the Professor Emeritus in Education and the Cultural Ministry and gave fellowship.
Some of the other musical awards were Sitar Sudhakar – 1932, Tantri Vilas – 1973, Sangeet Ratnakar – 1974, State Academy Award – 1974, Senior fellowship and Emeritus – 1986, Bhuwalka Award – 1987, Tansen Award – 1987, Special Honour University of Delhi – 1987.

His foremost disciples are Nirmal Guha Thakurta, Netai Bose, Shipra Chaudhury and Dr. Debu Chaudhuri. Latter is now the only living and/or active amongst this quartet. He has started a cultural Centre in New Delhi under the name of "UMAK ( acronym of Ustad Mushtaq Ali Khan ) CENTRE FOR CULTURE", with a view to have UMAK's music and his ideas alive, for the future generation those who will have regards for purity and tradition . Such great Masters are not understood well during their own time which is a sad story and reflection on our knowledge and understanding .

A follower of rasal vani, Khan Sahab was the only surbahar player who not only maintained the purity of the Rasdal Vani but also kept its purity alive till his last days and never diluted to please the masses and that is why his music was not understood by the masses but respected by the contemporary Great Masters. On 1953 had a Subahar recital in Raga Purya, in the First National Programme of the All India Radio New Delhi. It may be recalled that in the year 1953 Pandit Ravi Shankar was instrumental of instituting this National Programme of All India Radio and was present on this memorable occasion (live Concert) and praised Kahn Sahab profusely for his superb exposition of Raga Purya in a pure Dhrupad style with three Mezrabs.
He was a musicians musician and that is why he always shied away from the commercial attention. Instead Mushtag Ali Khan organised conferences where old masters and new artists were introduced to the cognoscenti and the novice. Among the well known names, Pandit Ravi Shankar was first presented by him to the public in Calcutta. Ustad had his undisputed popularity and demand during the early thirties to late forties.
Even in the evening of his illustrious career, he and his wife Begum Kaneez Khatoon were actively involved in variety of projects for promotion of art and culture in our country. He died on 21 July 1989.