Nawab Sir Khwaja Salimullah Bahadur, GCIE, KCSI (1871–1915) was the fourth Nawab of Dhaka and one of the leading Muslim politicians during the British Raj. He is the founder and pioneer of the All India Muslim League which had been established at the Ahsan Manzil Palace in Dhaka, the official residence of the Dhaka Nawab Family. Sir Salimullah, as he is commonly known, was also a key patron of education for the Muslims of Bengal. He had been one of the founders of the University of Dhaka and the prestigious Ahsanullah School of Engineering (now the Bangladesh University of Engineering and Technology BUET). Sir Salimullah was a staunch supporter of the Partition of Bengal. He was a member of East Bengal and Assam Legislative Council from 1906 to 1907. He was also a member of Bengal Legislative Assembly from 1913 till his death in Calcutta in 1915 at the age of 43. He was the founder President of Bengal Muslim League in 1907.

Salimullah began his career in government service in 1893 as Deputy Magistrate, a position he held until he departed in 1895 to start his business in Mymensingh. In 1901 he inherited the position of Nawab of the Dhaka Nawab Family following his father's death.
In 1903-04, Nawab Salimullah began supporting the partition of Bengal in the face of opposition of the Indian National Congress. On 16 October 1905, the day the Bengal Province was parted, Salimullah presided over a meeting of Muslim leaders from all over East Bengal in Northbrook Hall where a political front called Mohammedan Provincial Union partition, while the Congress built up a movement to oppose it. On 14 and 15 April 1906, Salimullah organized and was named president at the first convention of East Bengal and Assam Provincial Educational Conference at Shahbag, Dhaka. Later that year, newspapers published a dispatch from Salimullah to various Muslim leaders around India urging to form an all-India political party he called Muslim All India Confederacy, and leaders of the Aligarh Movement requested him to convene the 20th meeting of the All India Mohammedan Educational Conference at his own cost. Over two thousand people covering Muslim leaders from all over India gathered at the Nawab's family garden-house in Shahbag for the conference held between 27 to 30 December 1906. On the last day, the assembly formed the All India Muslim League, appointing Nawab Salimullah the Vice President and placing him on a committee to craft its constitution. Two years later, in December 1908, Salimullah would speak out for free speech in educational institutes and also rights for Muslims to separate elections.
Throughout these years, Salimullah held positions of authority in several leagues and conferences and continued to speak out on important political issues. In 1907, he became president of the All Bengal Muslim League, formed newly Kolkata. In 1908, he became the secretary of the newly established East Bengal and Assam Provincial Muslim League, becoming president in 1909. He served as the chairman at the 22nd Convention of the All India Mohammedan Educational Conference at Amritsar in December 1908. In 1909, he led people of wealth in the newly formed province to form the Imperial League of Eastern Bengal and Assam. In March 1911, at a meeting at the Ahsan Manzil, he presided over a decision to maintain the provincial Muslim League and provincial Educational Conference separate for political and educational activities. On 2 March 1912, Salimullah chaired a meeting at which the two Muslim Leagues of the Bengal were combined into the Presidency Muslim League and the two Muslim Associations were combined into the Bengal Presidency Muslim Association. Salimullah was made president of both the organisations. 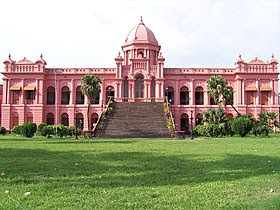 Front View of Ahsan Manzil, Dhaka
In August 1911, Salimullah demanded a university for Dhaka at a function at a political function at Curzon Hall, but it was not until after the shock of the annulment of the partition by George V on 12 December 1911 that Salimullah was able to achieve this goal. Within days of the annulment, Salimullah submitted a list of demands to Viceroy Lord Hardinge to protect the interest of Muslims. In response, a pledge was made to establish a university at Dhaka and to provide for Muslims an education officer, which pledge led to the inclusion of an Islamic Studies Department in Dhaka University. Salimullah continued afterwards to champion this cause, making speeches to counter those who argued against it and, in 1914, organizing a convention on 11–12 April for the Muslim Education Conference of United Bengal.
Along with his continued championing of education, Salimullah's last focuses before withdrawing from active politics in 1914 including situations involving Turkey. In 1912, he raised money from East Bengal to assist Turkish Muslims threatened by the Balkan wars. During World War I, however, he supported the Allied Powers after Turkey aligned with Germany.

Sir Salimullah is regarded in both Bangladesh and Pakistan as a great freedom fighter. Several of his descendants have gone onto to become prominent politicians in the later days of the British Raj and in Pakistan. They include one of his sons Khwaja Nasrullah who was the Governor of Calcutta, his grandson Sir Khwaja Nazimuddin who was the second Prime Minister of Pakistan, his great grandson Khwaja Hassan Askari who became a Member of the National Assembly of Pakistan. Other family members also became prominent political figures such as Khwaja Atiqullah, Khwaja Khairuddin, Khwaja Shahbuddin, Khwaja Nuruddin and Lieutenant General Khwaja Wasiuddin(the senior most general of Bangladesh Army). Sir Salimullah's great leadership had transformed the Dhaka Nawab Family into one of the most historic and significant political dynasties in the Indian Subcontinent.
Several places in Bangladesh have been dedicated in Sir Salimullah's name. They include most notably the following-
In 1990 the Pakistani government launched commemorative postage stamps honouring Sir Salimullah as one of the Pioneers of Freedom. In 1993 the Bangladeshi government launched a commemorative postage stamp in honour of Sir Salimullah.