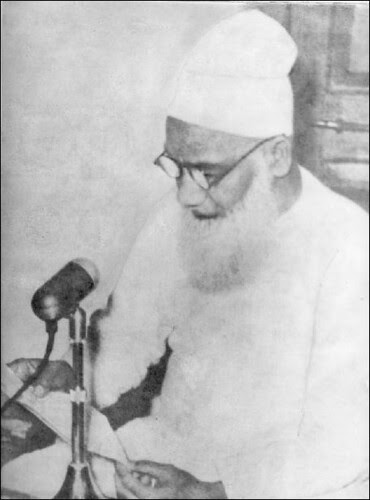 Shabbir Ahmad Usmani (October 6, 1886 - December 13, 1949) (Arabic: شبير أحمد عثماني‎) was an Islamic scholar who supported the creation of an Islamic system of governance in Pakistan after its creation in 1947. He was a theologian, writer, orator, politician, and expert in tafsir and hadith. He was also a student and khalifa of Shaikhul Hind Mahmud ul Hasan.

Usmani was born on October 6, 1886 in Bijnor, a city in Uttar Pradesh, India. His father, Moulana Fadhlur Rahman, was the deputy inspector of schools and had been sent to Bareilly when his son was born. Usmani was educated at Darul 'Ulum Deoband, where he became a disciple of Shaikhul Hind Mahmud ul Hasan, and graduated with distinction in 1908. After his graduation, he was appointed as a mudarris (teacher) at Darul 'Ulum Deoband. In 1915, when Shaikhul Hind journeyed to Hijaz, Usmani filled his position as the teacher of Sahih Muslim. In 1925, Sultan Ibn Saud of Saudi Arabia scheduled a conference for prominent 'Ulama from all over the world. A deputation of a number of 'Ulama from India participated in this conference, with Usmani among them. Sultan Abdul Aziz bin Sa'ud was impressed by Usmani's eloquent and scholarly lectures and initiated a number of reforms in his administration. In 1926, he moved to Dabhel and became a teacher at Jami'a Islamiyyah. In 1933, when Allama Anwar Shah Kashmiri died, Usmani became the teacher of Sahih ul Bukhari.


Usmani's greatest literary work is Tafsir-e-'Uthmani. This is an Urdu translation of the tafsir of the Qur'an written by his Shaikh, Shaikhul Hind Mahmud ul Hasan. In this work, Usmani derived extracts from thirteen or fourteen other works. His next most renowned literary work is Fathul Mulhim Sharh Sahih Muslim, which is a commentary on Sahih Muslim. He completed three volumes, and his work was complemented by a six-volume work, Takmila Fathul Mulhim, published by Mufti Muhammad Taqi 'Uthmani. Another of Usmani's notable works is Tark-e-Muvalaat Par Mufassal Tabsera, a pamphlet written in 1921 requesting that the 'Ulama lead the Muslims of India against the British. This pamphlet was banned by the British government. Usmani's other literary works include Hamara Pakistan (a pamphlet written in 1942), Hamara Islam, and Khutbat-e-'Uthmani.

During the Balkan War, Usmani held a prominent position collecting donations for the Hilal-e-Ahmar Fund. In 1944, he became a member of the Muslim League and was one of the few Deobandis who supported the creation of Pakistan. Usmani also founded the Jamiatul 'Ulama-e-Islam in 1946, to counteract the perceived propaganda of the Anti-Pakistan Movement and activities held by the Jamiatul 'Ulama-e-Hind. He served as its president until his death. It was due to Usmani's efforts that the Muslim League became a powerful organization and succeeded in the achievement of its goal.
After the Partition of India, Usmani became a member of the Constituent Assembly of Pakistan, and remained a member till his death. Usmani is remembered for having written the Qarardad Maqasid (Objective Resolutions) in March 1949, which was passed by the Constituent Assembly and became the basis of the Constitution of Pakistan. He participated in the preparation of the first draft of the Constitution, and conducted the inauguration of the flag of Pakistan and of the Constituent Assembly itself.

Usmani died at Baghdad ul Jadid in Bahawalpur State on December 13, 1949, and was buried at Islamia College, Karachi.