Dr. Mukhtar Ahmed Ansari (Hindi: मुख़्तार अहमद अंसारी, Urdu: مُختار احمد انصاری) was an Indian nationalist and political leader, and former president of the Indian National Congress and the Muslim League during the Indian Independence Movement. One of the founders of the Jamia Millia Islamia University he remained its Chancellor 1928 to 1936.

Mukhtar Ahmed Ansari was born on December 25, 1880 in Yusufpur-Mohammadabad town, Ghazipur district,(now part of Uttar Pradesh). Educated at the Victoria High School, Ansari and his family moved to Hyderabad. Ansari obtained a medical degree from the Madras Medical College and went to England on scholarship studies. He achieved the M.D. and M.S. degrees. He was a top-class student and worked at the Lock Hospital and the Charing Cross Hospital in London. He was an Indian pioneer in surgery, and today there is an Ansari Ward in the Charing Cross Hospital in honour of his work. 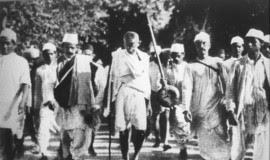 Dr. Ansari became involved in the Indian Independence Movement during his stay in England. He moved back to Delhi and joined both the Indian National Congress and the Muslim League. He played an important role in the negotiation of the 1916 Lucknow Pact and served as the League's president in 1918 and 1920. He was an outspoken supporter of the Khilafat movement, and worked to bring the official Khilafat body, the League and the Congress Party together on the issue against the Mustafa Kemal's decision to oust the Sultan of Turkey, who was the Caliph of Islam, and to protest the recognition of Turkey's independence by the British Empire.
Dr. Ansari served several terms as the AICC General Secretary, as well as the President of the Indian National Congress during its 1927 session. As a result of in-fighting and political divisions within the League in the 1920s, and later the rise of Muhammad Ali Jinnah and Muslim separatism, Dr. Ansari drew closer to Mahatma Gandhi and the Congress Party.
Dr. Ansari was one of the (Foundation Committee of Jamia Millia Islamia) founders and also served as the chancellor of the Jamia Millia Islamia university in Delhi soon after the death of its primary founder, Dr. Hakim Ajmal Khan in 1927.

Dr. Ansari's wife was a deeply religious woman, who worked with him for the uplift of Delhi's Muslim women.The Ansaris lived in a palatial house, called the Darus Salaam or Abode of Peace in Urdu. The Ansaris would often host Mahatma Gandhi when he visited Delhi, and the house was a regular base for Congress political activities. However, he never stopped practising medicine, and often came to the aid of Indian political leaders and the Indian princely order.
Dr. Ansari was amongst a new generation of Indian Muslim nationalists, which included Maulana Azad, Muhammad Ali Jinnah and others. He was very passionate about the issues of common Indian Muslims, but unlike Jinnah, was resolutely against separate electorates and opposed Jinnah's viewpoint that the Muslim League could be the only representative of India's Muslim communitie
Dr. Ansari was very close to Mahatma Gandhi and an adherent of Gandhism, with his core teachings of ahimsa and non-violent civil resistance. He enjoyed an intimate friendship with the Mahatma.
Dr. Ansari died in 1936 en route from Mussoorie to Delhi on a train due to a heart attack, and is buried in the premises of the Jamia Millia Islamia in Delhi.