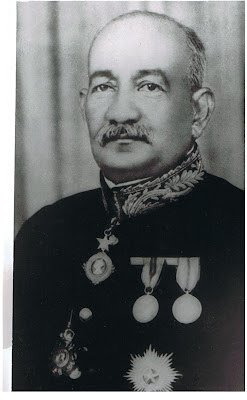 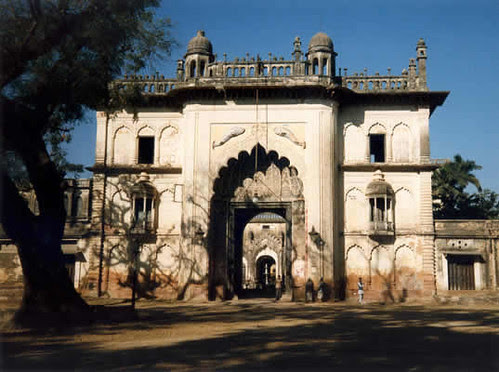 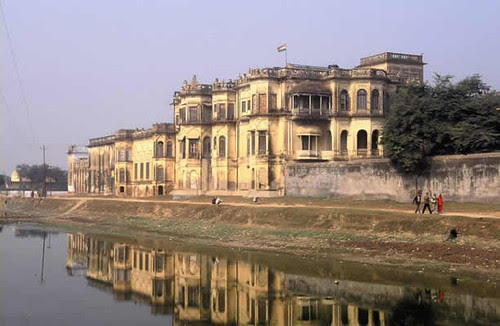 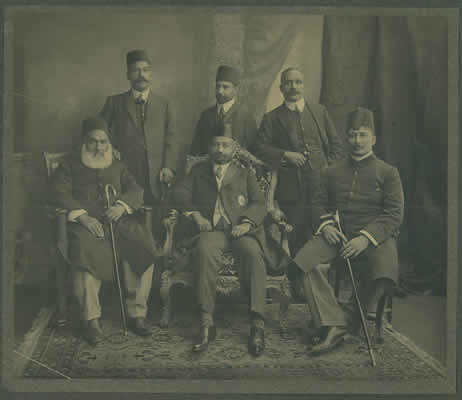 L-R(standing): Mr Aziz Mirza, Sir Ziauddin Ahmad, unknown*
Raja Mahmudabad, H.H. Mohammad Ali Mohammad, Khan Bahadur, was always keen in helping the community and specially Muslims of India. He was a strong believer of Sir Syed’s vision and follower of Aligarh Movement. He was convinced that educational development of Muslims of India will lead to a strong community and nation. Due to his passion for educational upliftment of Indian Muslims, he fully financed the 1904 session of Muslim Educational conference held in Lucknow under the chairmanship of Nawab Mohsinul Mulk. He also donated fifty thousand rupees (Rs.50,000/-) for scientific educational development at Mohammedan Anglo Oriental (MAO) College of Aligarh. In 1906, he was appointed as one of the trustee of MAO College Management Committee. In 1906, he joined a deputation which waited on Lord Minto, Governor General of India, under the leadership of H.H. Sir Agha Khan to demand for the religious and constitutional rights for Muslims of India. His strong commitment for the educational development of Indian Muslims led him to preside the 1909 session of Muslim Educational Conference in Rangoon at a very young age of 31 years. Raja sahib always supported the campaign for the Muslim University.
On December 17th, the Aligarh Muslim University came into being. According to the act (Section III) the first Chancellor, the first Pro-Chancellor and the first Vice-Chancellor were to be appointed by the Governor General of India. In an Annexure the act gave a list of 124 Foundation members of the First AMU Court. The Governor General of India, Lord Chelmsford appointed H.H. Mohammad Ali Mohammad, Raja Mahmudabad as its first Vice- Chancellor. Her Highness Sultan Jahan Begum of Bhopal and H.H. Sir Agha Khan were respectively appointed as Chancellor and Pro-Chancellor of the Aligarh Muslim University. The inaugural ceremony of University took place on the 17th December, 1920.
On 17th December, 1920 Raja Mahmudabad joined as Founding Vice-Chancellor of Aligarh Muslim University and immediately gave a generous donation of One Lakh rupees to College fund. The first meeting of University Court was held on 21st march, 1921 under the leadership of Raja sahib and Nawab Syed Mohammad Ali, the Honorary Secretary of M.A.O. College, was elected Honorary Treasurer, Dr. Ziauddin Ahmad, Principal of M.A.O. College, was made Pro-Vice Chancellor. Syed Sajjad Hyder, a member of the Court, was appointed Registrar and Mr. Abul Hasan, who had been Assistant Secretary of the College, was appointed Personal Assistant to the Vice-Chancellor. As the University ordinances had not yet been framed, the Government of India invested the Vice-Chancellor with extraordinary powers to deal with all matters of detail. Vice-Chancellor, Raja Mahmudabad put extra efforts to give a shape to the newly established University. To avoid delay and dislocation, he appointed Nawab Syed Mohammad Ali as his delegate to finish the works which he was not able to complete as Honorary Secretary. In Raja sahib’s leadership during 1922-23 the Executive regulations were framed. On the recommendation of Calcutta University Commission, a separate Intermediate College was started comprising of class IX, X, XI and XII and Major E. W. Dann was appointed its Principal. Later Prof. Abdul Majeed Quraishi was appointed as its Principal and Major Dann was requested to establish department of Geography.
The period of Raja Mahmudabad as Vice-Chancellor was a tough time. Due to the Non-Cooperation Movement, the student strength fell to 512 from 838. Vigorous efforts had therefore to be made to retrieve the position of institution. Administrative reorganization, need for coordination and financial difficulties were major issues to be addressed immediately. Notwithstanding the financial and other limitations, Raja sahib thus visualized its development programme. “A Training College for teachers is a crying necessity. A Technological institution is no less urgently needed. Provision for the study of the sciences of medicine and surgery will have sooner or later to be made.” Raja sahib did some significant addition to the staff of the University. Dr. D.N. Mallick, professor of Presidency College Calcutta joined AMU as Professor of Physics and Chemistry. Mr. Mohammad Habib, who obtained Honors from the University of Oxford was appointed as professor of history. Mr. N.K. Mukerji was appointed principal of the Training College. Raja sahib’s generous contribution of one lakh rupees made possible to purchase 193 bighas of land for the expansion of University. During his tenure as VC, a lot of constructions were done e.g. Completion of Clock tower, Osmania Hostel, School Staff Quarters, Enclosure Wall round Minto Circle, Completion of the half western wing of Osmania Hostel and Intermediate College lecture Rooms.
The Vice-Chancellor, Raja Mahmudabad resigned with effect from March 1, 1923 due to pressure of his official duties as Home Minister in U.P. Government. Even after resigning from AMU as its Vice-Chancellor, his association with the University was never diminished. Aligarh Muslim University honored one of his great mentors by naming a hostel after him. Mahmudabad Hostel is part of Sir Shah Sulaiman Hall .
Source : Aligar movement.com