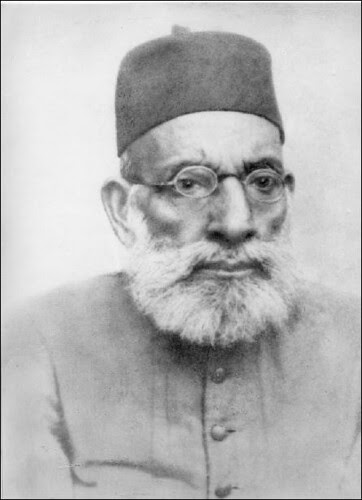 Maulana Hasrat Mohani (1875–1951) (Urdu: مولانا حسرت موہانی) was a romantic poet of Urdu language, journalist, politician, parliamentarian and a fearless freedom fighter of Indian Sub-continent . His real name was Syed Fazl ul Hasan. He was born in 1875 at Mohan in Unnao district of U.P. India.
He was a brilliant and hard working student as well as a topper in his first state level exams. Later, he studied in Aligarh Muslim University, where some of his colleagues were Molana Mohammad Ali Johar, Molana Shaukat Ali, etc. His teachers in poetry were Tasleem Lucknawi and Naseem Dehlvi. A few of his books are Kulliyat-e-Hasrat Mohani (Collection of Hasrat Mohani's poetry), Sharh-e-Kalam-e-Ghalib (Explanation of Ghalib's poetry), Nukaat-e-Sukhan (Important aspects of poetry), Mushahidaat-e-Zindaan (Observations in Prison), etc. A very popular ghazal sung by Ghulam Ali, Chupke Chupke raat din... was penned by Hasrat Mohani.
Hasrat Mohani participated in the struggle for Indian Independence (end of British Raj); and was jailed for many years by British authorities. He was the first person in Indian History who demanded 'Complete Independence' ( Azadi-e-Kaamil) in 1921 as he presided over an annual seesion of All India Muslim League. He was not only a practising Muslim but also a strong supporter of the communist philosophy, as he could see that British could be possibly defeated by following its principles. Therefore, he was among the founders of The Communist Party of India. He was also imprisoned for promoting anti-British ideas especially for publishing an article against British policies in Egypt, in his magazine 'Urdu-e-Mualla'. Afterwards, unlike some Urdu poets, notably Josh Malihabadi and Nasir Kazmi, and many Muslim leaders, he chose to live in India rather than move to Pakistan after independence (1947)in order to represent left over Indian Muslims on various platforms. In recognition for his efforts, he was made a member of the constituent assembly which drafted the Indian constitution. But unlike other members, he never signed it since he saw hypocrisy towards Muslim minorities in it (he was a Muslim himself). According to Akhtar Payami: Hasrat's poetic genius has been acclaimed by many writers and critics. In the not too distant past (beginning and the first half of the 20th century), Hasrat, Jigar and Asghar formed a constellation of emerging poets in a crucial period of India's history. Major political developments were taking place in the subcontinent and the sun was about to set on the British Empire. As conscious members of society, poets and writers do not remain indifferent to the changes in their socio-political milieu. Not only India but the whole world was in a state of flux.
Maulana died on 13 May, 1951 in Lucknow, India.


Maulana Hasrat Mohani was born in 1878 in the middle class family of Syed Azhar Hasan in a small town Mohan in Unnao district, around 25 kilometers west of Lucknow. His ancestors Syed Mahmood Nishapuri came from Nishapur and settled in Mohan. He was a descendent of Imam Hazrat Ali Moosa (R.A.). He completed his primary education from a Maktab (traditional Madarsah) in Mohan and acquired the knowledge of Urdu, Persian and Arabic from his teachers, Miyan Ji Ghulam Ali Mohani and Miyan Ji Balaqi Mohani. In 1894 he passed his middle school from Mohan middle school and secured First position in entire state of Central Province. In 1899, he completed his High School from Government High School of Fatehpur with honors, was awarded a scholarship and joined Mohammedan Anglo Oriental College (MAO) Aligarh (now Aligarh Muslim University). He completed his admission in Inter College on 15th March 1899. When he arrived in the college, he was short in height, ,em>lagar badan, gandumi rang, uljhi uljhi darhi (beard), Kalabatuni topi, Char Khaney ka Angarkha, takhno se uncha pajama, old fashioned glasses, umbrella in one hand a paandaan in second. His typical appearance and style gave him a lot of attraction and a title “Khala Jaan”, which stuck with his name in Aligarh for a while. But very soon due to his caliber and attitude, he earned the respect of student community and became very popular and transformed from Syed Fazlul Hasan to “Maulana Hasrat Mohani”.
Prof. Babu Jadav Chandar Chakravarti, Dr. Ziauddin Ahmad and Sahebzada Aftab Ahmad Khan were among the college faculty and Theodore Beck was Principal of the college at that time. Syed Sajjad Haider Yaldaram, Maulana Shaukat Ali, Maulana Muhammad Ali, Khan Bahadur Syed Abu Muhammad and Zarif Dahri were among his contemporaries in the college. After few months of young Fazlul Hasan’s admission, Principal Theodore Beck died. He wrote a poem to praise Principal Beck on his achievements and love for the college.
Hasrat completed his Intermediate exam in 1901 and joined B.A with Arabic and Mathematics as Optional subject. He was a nationalist so once College Cricket team beat an English team and Maulana Hasrat Mohani led the celebration. Unhappy British establishment in the college had him rusticated. Maulana fought back and got re-instated but was not allowed to live in hostel so he moved to a rented place in Rasal-Ganj area of Aligarh city. During his college days he started taking interest in national politics which was also not accepted by College administration and he was rusticated again, but every time he fought for truth and came back to college to complete his education. In 1903 he completed his B.A. MAO College which was affiliated with University of Allahabad so he received a degree of BA from University of Allahabad.
He was an ardent supporter of Aligarh Movement and mission of Sir Syed Ahmad Khan. His personality was a true interpretation of the product of Aligarh Movement, what Sir Syed had dreamed years ago. The basic principle of Aligarh Movement was to follow your religion with full faith and integrity and at the same time take part in the individual and community growth to live a better life. Maulana Hasrat Mohani followed this principle in its entirety. From his early days to his last breath, he was an ardent follower of Islam. His participation in the freedom struggle of India, anti British establishment nature, social communism lineage never deviated him from his religious beliefs and practices. During his stay of 2 years in jail, despite of the hard work, he was observing Ramadan fast and regular prayers.

For the Palestine Cause:Palestine Conference,Cairo, Egypt. 1938, Top: Chowdhery Khaliquzzaman, Down: Hasrat Mohani, Middle: Abdul Rehman Siddiqui
In subsequent years, the Maulana was in the forefront of, first, the struggle for Pakistan, and, later, for the rights of the Muslims in the Indian dominion. In 1945, he was elected as a member of UP Assembly and member of The Constituent Assembly as a representative of Muslim League. After the birth of Pakistan, he stayed behind in India to face the aftermath and to safeguard the interests of Muslims in India. He was the lone member of the Indian Constituent Assembly who refused to sign the Indian Constitution. He asserted that at such a critical moment he could not think of leaving the Muslims of India in total despair. His struggle continued against injustice, poverty and ignorance. A person who had withstood the onslaught of British Imperialism his entire life in the present century did not give serious consideration to the threats, intimidations and insinuations. His memorable words challenging Sardar Patel, in the Constituent Assembly, will long live in the memory of future generations: “You should not think that Muslims are orphans today. I am here to defend their rights against all odds and will fight for them till death”.
Urdu literature
The other side of Maulana Hasrat Mohani’s life was his love for Urdu literature and poetry. His involvement with literature and journalism brought into sharp focus the loving man that he was who introduced a new trend in Urdu poetry, which was a mingling of the praiseworthy attributes of the schools of thought that existed in Delhi and Lucknow. The exceptional qualities of sincerity, forbearance, fearlessness, perseverance, patience and contentment which the jail life had developed in his character, are profoundly reflected in his poetry. He has left behind ten volumes of poetical works. His individuality as a poet is reflected in his poems throughout his career, but the best part of his contribution to Urdu Poetry was composed in jail, wherefrom each time when he was released, he used to bring out a volume of Urdu poems. Though he was not supplied with paper and ink in the jail, he memorized his couplets and released them to the press on the expiry of his term of imprisonment. He was the founder of the Modern Urdu Lyrics. He revived the lyrics in Urdu. He emphasized on depth of feelings and sincerity of thought, with the result that Urdu lyrics had become a mixture of unnatural and artificial picture of human life and brought about the renaissance of Urdu lyric. He concentrated mainly on the sincerity of thought and simplicity of diction; hence his poems paint the true but dignified sentiments of love and portray the multifarious phases of human passions. In this way, though Hasrat may be termed as a conservative lyrist, yet he infused a new life in its fast decaying body and after Mir may be classed as the best Urdu lyrist. Maulana Hasrat Mohani has an individuality of his own and was the pupil of Taslim in the realm of poetry. He comes in the line of Momin Khan Momin and Naseem Dehlavi in respect of the type of his verses, but he carved out an independent course for giving vent to his sentiments. His main attributes are the purity of thought, simplicity of sentiments and simplicity of diction. Like Mir, Hasrat, too, passed a life of despair and anxieties, hence there is a spiritual connection between the two and the works of both reflect deep pathos. His poetry, according to Arnold, is the mirror of his life; hence, it has been much affected by his environments and portrays much variety of subjective phases of his many-sided personality. His poetry is mainly subjective and he has tried to avoid the objective colour which had crept into the works of Urdu lyrists of Lucknow. He has depicted numerous pictures of those turbulent times, giving a realistic touch to his poems. He founded a new School of Urdu Lyrics whose aim is to depict true human sentiments and reactions to his environments. He is the true product of his time. According to Mathew Arnold, "Literature is the mirror of life", and like the celebrated English poet Lord Tennyson, Hasrat too has been much affected by his environments. His verses are full of revolutionary thought, reactions and national aspirations of a person whose life was so stormy and turbulent. His lyric composed in the Faizabad jail, carrying the following couplet, is a typical instance in point:
Hai mashqi sukhan jaaree chakkee kee mushaqqat bhee
Ik turfah tamaashah hai hasrat kee tabee`at bhee
(Hasrat is continuing his hobby of composing verses side by side with the grinding of wheat. What a peculiar nature does Hasrat possess!)
Here is his another poem;